Low also included 20-year-old Schalke forward Leroy Sane, who was representing his country at under-19 level a year ago, in his selection and admitted he did not have any idea which four names he would remove from his final list.

Manchester United's Bastian Schweinsteiger has also been included, although he first has to prove Low of his fitness having only just recovered from injury.

"Schweinsteiger is our captain and of course he's here," Low said at a news conference in the French embassy in Berlin.

"He's had an injury, but he's able to run now and we've been in touch with him on a daily basis and we'll find out if he can train with us from next week.

"But he's our captain and it's not an issue right now. If he doesn't make it, which we hope will not be the case, then we'll decide what to do."

Speaking about the surprise names in his squad, Low said that Sane is "extraordinary" who can "do something special and is incredibly fast", while Julian Weigl has "great vision and understanding of the game, is assured on the ball and in his passes".

Kimmich's versatility makes him an important choice, particularly in the injury-enforced absence of Ilkay Gundogan, since "he can play in defence, as a defensive midfielder, he has played wide for Bayern too and he has played and trained at a very high level".

Finally, Low said Brandt is "a young player who is technically very good and quick and combines well even in a tight space", adding that his recent form for Leverkusen convinced him to call him up.

"We believe the group is more important than every individual player, and this is the criteria we have used to pick our squad.

"We're not getting carried away - we know we are not unbeatable - but we are confident.

"There are no players in this 27-man squad who we already see as candidates to be left out.

"I'm pretty relaxed about it because we've got a few friendlies and we can see who deserves a place in our final squad."

While there were several surprise inclusions, there were also a few names missing who might have expected to be included, such as Christoph Kramer, Erik Durm and Matthias Ginter.

"Of course there are a few there who were at the World Cup who already have the feeling of what it means to win a title and it's obvious that these players are hugely disappointed and will need a bit of time to get over this," Low said.

"They work all year for this so of course you do feel their disappointment and I think they'll need a few days to get used to it, but they will get a chance again after the European Championship and they should take it as motivation to improve their own games."

In goal, Manuel Neuer is the undisputed number one, but goalkeeper coach Andreas Kopke said he did not want to determine a specific order, out of respect for the players.

Marc-Andre ter Stegen and Bernd Leno will be the Bayern custodian's back-ups, though, with Kevin Trapp and Ron-Robert Zieler left out

"It's the sixth time I've done this and it still hurts to have to tell people they are left out," said Kopke. "It was a very difficult decision, but we're convinced by it."

Low's squad will get together for a training camp in Ascona, northern Italy, from 24 May to 3 June.
His final squad will be submitted to UEFA on May 31, after which they face Hungary in a friendly on 4 June before moving into their base for the European Championship in Evian-les-Bains on 7 June.

Germany's opening fixture at Euro 2016 is against Ukraine in Lille on 12 June. 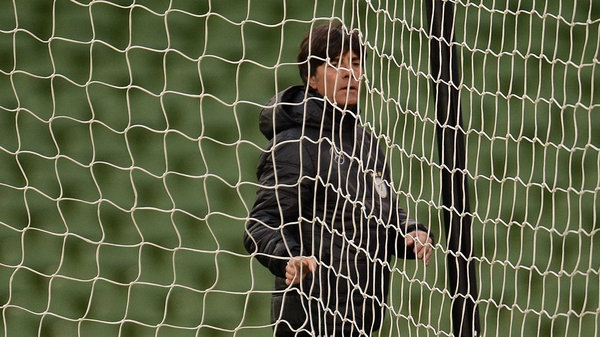