Natalya Coyle could yet represent Ireland at the Paris Olympics in 2024, after rowing back on suggesting that she would retire in the wake of the Tokyo Games.

Coyle suggested that she would retire after a heart-breaking end to her third Olympics when her dreams of a medal in the modern pentathlon were undone by a disastrous show jumping round when her horse refused to co-operate.

Superb performances in the two fencing rounds and swimming had put Coyle in fourth place heading into the show jumping, with a real prospect of ending on the podium. However, her horse Constantin performed poorly, refusing a number of fences and incurring time faults.

In the immediate aftermath of that performance Coyle said: "It's not the way I wanted to finish out my career."

However, speaking to RTÉ Sport, she admitted that she had been caught up in the disappointment of the moment and could consider another Olympic run.

"I didn’t mean it in the interview in that way, it was just not how I wanted the day to finish," she said.

"I put myself into a position when I could have won a medal and I do think I could have so that was the really disappointing part for me.

"It’s only three years until Paris, it will be no time rolling around for our athletes. I’m kind of unsure at the moment but we’ll wait and see."

Coyle admitted that she still feels that an another day she would have been standing on the podium.

"I am obviously really sad about it and I really did, and I do still think I can win a medal," she said.

"Looking back I’m really happy with my fencing. To come third at the Olympics in fencing is something I would have dreamed about when I was younger.

"Obviously the end was not great but the incredible support I’ve got since I’ve come home has bowled me over." 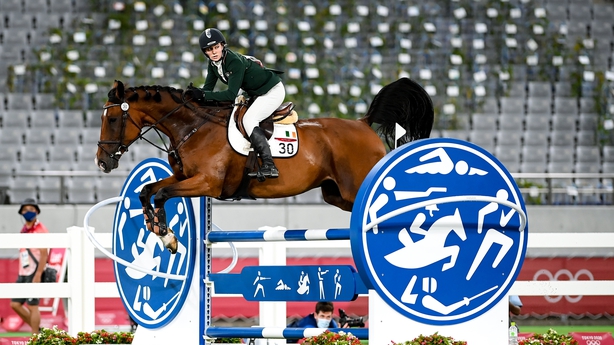 The Irish Olympian also had plenty of sympathy for German pentathlete Annika Schleu whose horse Saint Boy refused to jump at all in Tokyo.

Schleu was holding down top spot with a commanding 24-second edge on the field going into the show jumping, where each competitor randomly draws a horse.

Coyle felt that Saint Boy should have been withdrawn and Schlue offered a different horse.

She said: "There have been issues at most Olympic Games and because the world was watching and there were some high-profile incidences with some of the top athletes falling down it really highlighted it.

"It was very tough for me because I saw the previous athlete and she didn’t get around or near to the jumps so I knew it was going to be tough.

"I know it was going to be tough but I put that at the back of my mind and hoped that I could get through it but it didn’t happen.

"For other athletes I definitely think the German girls’ horse should have been eliminated from the first round and she shouldn’t have been on it.

"It’s very difficult to watch people giving her the amount of abuse, I think she was getting death threats at some stage and that sort of stuff – she’s just an athlete. If you haven’t been there to win an Olympic gold medal, I don’t think you can hit back as hard."