Corkman Twomey, who is based in Nottinghamshire, denied 60-year-old Yorkshireman John Whitaker a £15,000 top prize at Liverpool Echo Arena by coasting home on Diaghilev by 1.6 seconds.

Whitaker, riding 2016 Rio Olympics hopeful Ornellaia, had to be content with second place in a time of 36.47 seconds, with Sweden's Peder Fredricson taking third aboard H&M All In, while the remaining top six places, respectively, were filled by British trio Robert Bevis (Courtney Z), Robert Smith (Bavi) and Peter Charles [Stapleton Mist].

"I am really delighted," Twomey said. "It's an unbelievable show here, and I have got some happy owners and some happy children tonight.

"It came off for me today. The Horse of the Year Show was Diaghilev's last big event, really, but he has slotted straight back in, which is great. He has a lot of power and scope."

"It's an unbelievable show here, and I have got some happy owners tonight."

Earlier in the day, Emanuele Gaudiano continued a run of Italian success in Liverpool by claiming the four-star speed class.

And it meant that either Gaudiano or his Italian colleague Piergiorgio Bucci triumphed on all three days of competition.

Gaudiano's latest victory was on his New Year's Day winner Cochshynsky, and it was delivered in comprehensive fashion.

A time of 54.08 seconds proved beyond the reach of his rivals, with Britain's William Funnell and Billy Angelo taking the runners-up position, almost three seconds behind.

"I think this is a good moment for me in my career," he said.

"The horse is very fast, I know her well, and I know exactly when and where we can go quickly.

"I will compete in Basle next, and then Leipzig. My aim now is to try to qualify for the World Cup final later this year." 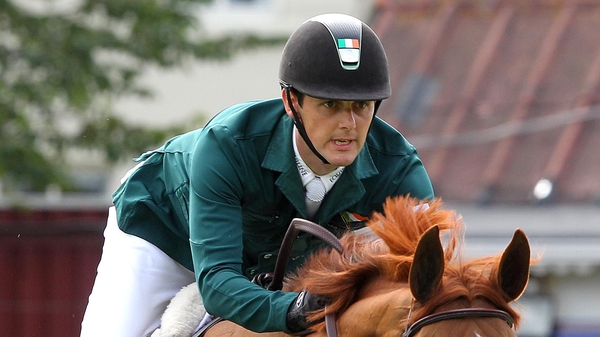