Despite being up against some of the world's best horses and riders, Wexford's Bertram Allen, who turned just 19 earlier this month, romped home in first place in the prestigious Longines Grand Prix at the Discover Ireland Dublin Horse Show.

Tension mounted in the main arena when Allen and Ballywalter Farms's grey mare Molly Malone V became the only Irish combination to make it through to the eight horse jump-off.

While they subsequently set the fastest time of the final round, the home crowd was on edge as last man in, the celebrated Canadian rider Ian Millar and his 11-year-old gelding Dixson attempted to snatch the Longines trophy with a swifter finish.

However, not only did Millar and Dixson fail to match Allen's time, they also had one fence down for four faults, relegating them to sixth overall.

A delighted Bertram Allen, who had shown form earlier this week with his clear round in the Aga Khan Trophy, also with Molly Malone, picked up the winner's cheque of €66,000.

The runner-up prize of €40,000 went to the USA's Kent Farrington and the 13 year-old gelding Uceko, while France's Timothée Anciaume with Padock du Plessis*Hn received €25,000 for third place.

Ireland's Thomas Ryan placed tenth in the Grand Prix aboard the grey gelding Caribo, being the fastest of the first round four-faulters.

Forty international riders and horses took part in the competition, which was the last international class of this year's Horse Show. 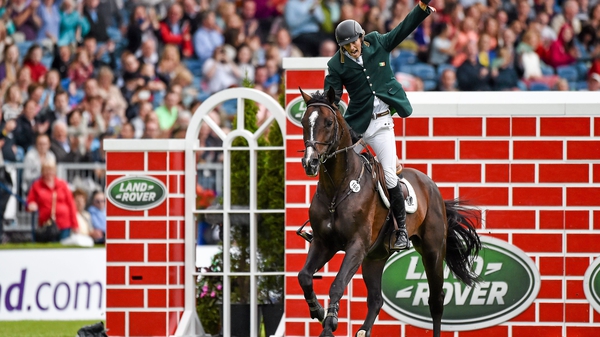