Ireland dominated the Puissance competition at the Dublin Horse Show with Cork's Billy Twomey and Kilkenny's Michael Hutchinson sharing the €20,000 pay cheque when they were the only riders in the fourth jump-off to clear the big wall at 2m20 (7'3")

37-year-old Twomey, riding the gelding Afp'S Quick Vainqueur, said afterwards: "What a horse this is. I got him just last week, he's a puissance specialist, and all I had to do today was get him in the right place, and he did the rest."

Hutchinson, who is 24 and from a distinguished show jumping family, commented on his 13 year-old gelding Acorad 3: "I'm so happy with the horse. He was not 100 per cent fit, but he gave me everything here today, helped on, of course by this wonderful crowd at the RDS."

Alexander Butler and Tsjakka took third place, dislodging the top brick in the wall on the final jump-off, but collecting €6,000 for his efforts.

BTwomey was the first competitor today to see the Irish flag raised again in the main arena of the RDS when he scooped the €4,600 for first place in the big Accumulator class.

Greg Broderick and the Irish Sport Horse MHS Going Global were best of the Irish in the following 1m50 Jump-Off competition, faulting once in the five horse jump-off to finish fourth behind German winner Daniel Deusser and the bay gelding Fyloe V. Claeyssenhof, who were one of three combinations to go clear. 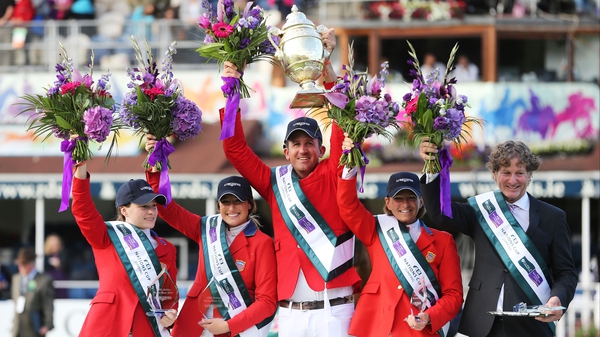