Limerick’s O’Connor dropped just one leg in a comprehensive win over the three-time BDO and former Premier League champion at Alexandra Palace.

The 35-year-old from Cappamore, ranked 42 in the world, took out a 170 finish in the opening leg and never looked back against an out of sorts Durrant.

Smith, a former World Championship finalist and ranked nine on the order of merit, hit the tournament’s highest average, 106.32, when he beat Ron Meulenkamp yesterday.

INCREDIBLE START TO THIS MATCH!

Willie O'Connor pins a perfect bull for a 170 checkout and he breaks throw in the opening leg!#WHDarts pic.twitter.com/mFcksHVrId

"It was great, I'm happy to win the game. Glen wasn’t at his best," said O'Connor.

"I started well, took out 170. In my head I was playing the best version of Glen. Then I realised Glen didn’t show up. I found it very deflating.

"I want to say Happy Christmas to Glen. He'll come back, he’s a champion, from all in Ireland, [respect]."

Willie O'Connor only drops one leg as he whitewashes a struggling Glen Durrant to book his spot in the third round!#WHDarts pic.twitter.com/WesOhiI5ST

O'Connor will face Smith on Monday.

He added: "I'll practice away as normal, I won’t overdo it. I’ve no choice but to play better."

Fermanagh's Brendan Dolan gets his campaign under way tomorrow when he faces England's Callan Rydz.

Tenth seed Nathan Aspinall, a World Championship semi-finalist in 2019 and 2020, vowed to carry on playing through the pain barrier after surviving a match dart to also reach the third round where he will face either Dolan or Rydz in the last-32.

Fellow Englishman Joe Murnan had a shot at double top to take out Aspinall 3-1.

But Murnan missed and Aspinall - who has been suffering from golfer's elbow and tendinitis and was wearing strapping on the oche to protect his injured throwing right arm - stepped in to turn the match on its head.

"I've been advised to have three months off but it's not happening," Aspinall told Sky Sports after hitting eight 180s in his 3-2 recovery victory.

"I had an injection last week. It's uncomfortable but I can still play and I've been practising really well.

"It's not nice but I can still win everything. I dug deep and never gave in.

"I can have two days off now with my family, enjoy Christmas, and then it's all forward for Gezzy's (Gerwyn Price) title."

Former BDO world champion Steve Beaton had eliminated Fallon Sherrock in the first round but bowed out with a 3-1 defeat to Kim Huybrechts.

The Belgian, who will meet world champion and world number one Price in the last 32, said: "Honestly that was one of the worst games I've ever played at Ally Pally.

"I was so nervous and I was struggling up there. I was very lucky to win, it was a horrible game."

Borland had dramatically won the deciding leg of his first-round match against Bradley Brooks in the quickest way possible - the first player in a televised PDC event to do so.

But the Scottish debutant could not derail Searle as the world number 15 secured victory with a 116 checkout.

Joe Cullen recovered from 2-1 down to overcome Jim Williams in a five-set thriller, hitting eight 180s and averaged 107 and 103 in the final two sets. 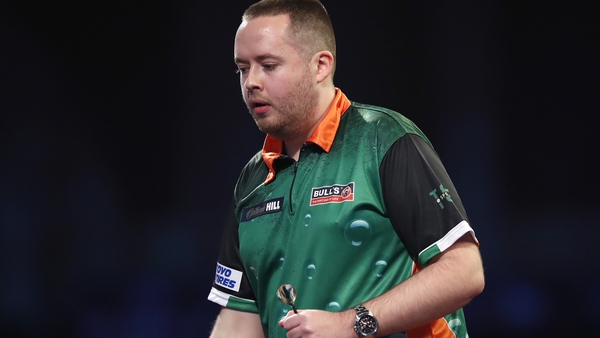