The Carlow man beat the Pole 3-1 to progress to a round-three meeting with either Mervyn King or Ryan Joyce.

The 28-year-old hit six maximums and 18 140s to knock out the Polish number one.

"I'm happy with how I played but surprised by the result," he said.

"I didn’t think he’d play the way he did, usually he’d score the way I was scoring.

"I knew I had to capitalise on it. It’s a perfect Christmas present."

What a win for Scuba Steve! pic.twitter.com/8DN2HocrfP

Meanwhile, Keane Barry is through to the second round after a nervy 3-2 win over Royden Lam at Alexandra Palace.

The 19-year-old Meath man rattled in checkouts of 108 and 121 against the Hong Kong thrower as he won his first match at the showpiece tournament at the third attempt.

But he made it a lot harder than it should have been, blowing a 2-0 lead before breaking Lam's throw twice in the final set, during which the Asian qualifier missed a number of attempts to bring the game to a sudden-death leg.

Barry will meet the in-form Jonny Clayton of Wales on Sunday in the next round.

It's a first Ally Pally victory for the 19-year-old Keane Barry as he leads Lam to the slaughter, closing out a 3-2 success!

"[I'm] happy. That was going through my head, that the last two years things didn’t go my way but thankfully it’s third time lucky," Barry told the PDC.

"I don’t know why I put myself under that pressure, I just need to relax and I'll play well.

"I felt it slipping away but thankfully he missed those doubles and I nicked it in the end.

"It means a lot to win that game.

"Any time I’ve played him on tour it’s been a great game and I enjoy playing against him. Now I can just relax, I have my win, a monkey off my back.

"I’m hoping to up my game and stranger things have happened."

With the scores locked at 2-2 in the deciding set Borland struck perfection with three treble 20s, followed by two more and treble 19 on his second visit.

The 25-year-old then hit two more treble 20s and finished on double 12 to send the crowd into raptures on his World Championship debut.

Brooks, 21, had hit back from 2-0 down in the decider, having reeled off three successive legs to win the fourth set and extend the match.

Borland’s effort was the 11th nine-dart finish at the World Championship and the first since Gary Anderson completed the feat in his semi-final win against Jelle Klaasen in 2016.

Paul Lim was the first player to achieve a nine-dart finish on the biggest stage in 1990 at the BDO World Championship.

The Singapore veteran, who made his World Championship debut in 1982, was denied a place in the second round of this year’s tournament after being edged out 3-2 by Joe Murnan.

But 67-year-old Lim pushed his opponent all the way, taking the match to a deciding set after Murnan had missed match darts in the fourth.

Second seed Peter Wright, world champion in 2020, was not at his best but still proved to good for Ryan Meikle, who he defeated 3-0 to reach the third round.

Ross Smith booked his place in the second round with a comfortable 3-0 win against Canada’s Jeff Smith. 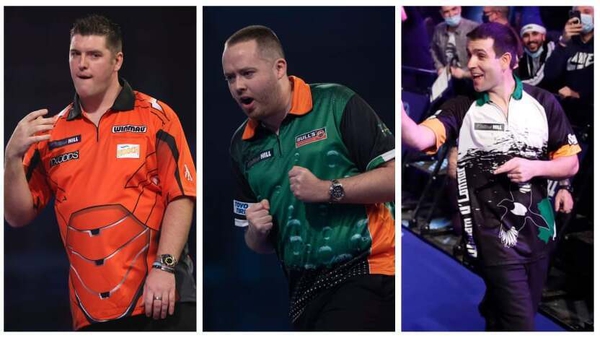