Mervyn King survived a scare from Cork's Ciarán Teehan to edge into the third round of the World Darts Championship.

A day after Limerick's Willie O’Connor bowed out in bizarre circumstances, Teehan also made for the exit door, but only after an almighty fight against the highly fancied King.

King, a semi-finalist nine years ago, needed just five attempts at doubles to take the opening set, with the second also going the way of the 53-year-old, though Teehan did pick off a 13-dart leg.

The 20-year-old however refused to throw in the towel and charged into a spirited comeback.

A 76-out shot was enough to win the third set, while the fourth, Teehan took the deciding leg with his opponent throwing for the match.

With the tension increasing, King reeled off the first two legs, but again the Leeside tyro refused to blink. A double 16 finish, followed by a 13-dart leg sealed it at 2-2 as the game went to a tie-break.

King has been embroiled in a battle here as Teehan levels the deciding set taking it to a tie-break! pic.twitter.com/BVARyOtBc3

That however seemed to jolt King back into action.

Three missed shots at D12 allowed the world 21 swoop in to make it 3-2, and he wrapped up the game minutes later to seal a 3-2 victory and a date with either Simon Whitlock or Harry Ward in the next round.

"He's a great player and we will be seeing a lot more of him," King said afterwards

"If we don’t, I don’t know why. He throws a lovely dart, he’s got it right between the ears." 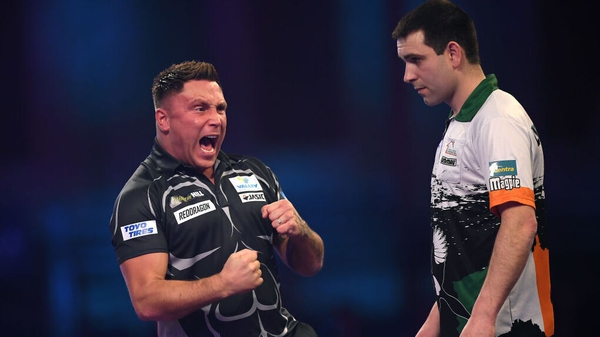