For the second year running Ireland will have its biggest representation at the William Hill World Darts Championship with no fewer than eight players from the island stepping up to the oche.

Two of the contingent are making their debuts at the famous Alexandra Palace venue, which boasts a £500,000 cheque for the winner, with Meath's Keane Barry, at the age of just 17, set to become the third youngest competitor ever at the showpiece event and the youngest Irish player ever.

Barry, who will also contest the Junior Darts Corporation final at the same venue on 21 December, qualified after surviving 11 match darts to win the Tom Kirby Matchplay at Citywest in October, faces world number 33 and crowd favourite Vincent van der Voort of the Netherlands.

"When I learned the draw, I started to think, 'this is actually happening'. It’s about getting the right preparation and getting everything in line," Barry told RTÉ Sport.

"It’s kind of what you dream of when you are a young lad but I never thought I’d be 17 and playing in the World Championship."

Barry’s game takes place on a landmark day for Irish darts. Three of the four games will involve an Irish player but that could be increased if Brendan Dolan, the History Maker from Fermanagh, can overcome India’s Nitin Kumar on Sunday.

If Dolan, a quarter-finalist here last year, and ranked 35 on the PDC’s order of merit, wins he will face two-time champion Gary Anderson (5).

The Belcoo thrower, who won his first PDC event in five years in August and followed it up with another Players Championship in October, would dearly love a high-profile showdown with Anderson on 'Irish Night’ but won’t look past Kumar.

"I will be well prepared for Nitin," said the 46-year-old.

"I will give him respect, it will be his second year to play in the Worlds but it is my 12th consecutive year here I think I have increased my standard of play over the last 12 months. Practice is going nicely and I’m playing with more confidence then I have ever had before."

Monday night opens up with Carlow’s Steve Lennon (ranked 38) up against debutant Callan Rydz from Newcastle.

Lennon was part of the Republic of Ireland side that got through to the World Cup of Darts final in August and his partner, Willie O’Connor (37) from Limerick takes on Finland’s Marko Kantele in the second game.

The duo saw off England, Austria and a Holland side with Michael van Gerwen before losing to Scotland in the decider.

O’Connor made it all the way to the Players Championship quarter-final last month and his decision to turn pro has resulted in more consistent performances. A date with the on-form Gerwyn Price is the prize for beating Kantele.

Lennon was last on show at the Grand Slam of Darts where he was unlucky not to progress after winning two of his three group games.

"I feel any time I've played on stage this year I've performed well so hopefully that continues for the Worlds," said the 25-year-old.

"I'm back playing well so hopefully I can have a good run in this."

Barry's game with Van der Voort is the third game of the night, with Dolan hoping to make it four in the final match.

Cork’s Ciaran Teehan is also set to make first appearance at the event. Qualifying via the development tour, where he earned a full tour card for next season, the 20-year-old feels there is little pressure on him against England's Ross Smith (49), who made it to the quarter-finals of the UK Open earlier this year.

"It’s a free shot really," said Teehan. "The pressure is on him because it goes on his rankings. I’ll be going over to win. If I play my game I should be okay."

Tyrone’s Mickey Mansell (62) must wait until Wednesday for his chance to break his first-round duck.

"It’s all good," he said of his preparation, "any free time is spent on the practice board."

The Clonoe Cyclone faces off with Seigo Asada of Japan in the afternoon session on the 18th.

The Japanese thrower has been a force on the Asian tour this year and also made it to the semi-final of the World Cup.

Top-ranked Irish player Daryl Gurney goes straight into round two and he will face the winner of Justin Pipe and Benjamin Pratnemer on the 21st.

The Derry man is world number six and has the game to beat the best. A two-time major winner, many feel that there is still more to come from the 33-year-old.

"The World Championship is something that I'm really hungry to win"

"I've won two major titles," he said, "but the World Championship is something that I'm really hungry to win. The best players in the world will all be up for the fight and I'll be giving it my all."

It’s a long wait for action and demonstrates how the new format – expanded to 96 from 72 two years ago – draws out the opening rounds.

First up this evening is Kevin Burness (87), known as the Iron Man, who battled his way through the last chance saloon of the PDPA qualifier in Wigan to book a spot for the second year in a row.

Co Down’s Burness faces former BDO champion Jelle Klaasen (48) with the prize of a match-up against reigning champion and number one seed Van Gerwen up for grabs in the last match of the night.

"I think that I’m a much better player now," the 54-year-old, who qualified via the Tom Kirby Matchplay last year, told Tom Beresford.

"With the experience that I’ve gained over the last 12 months, it’ll stand me in good stead.

"After a poor year on the pro-tour, I’m really happy to qualify for the World Championship. I changed my darts and my throw about [seven] weeks ago and the results are really starting to show." 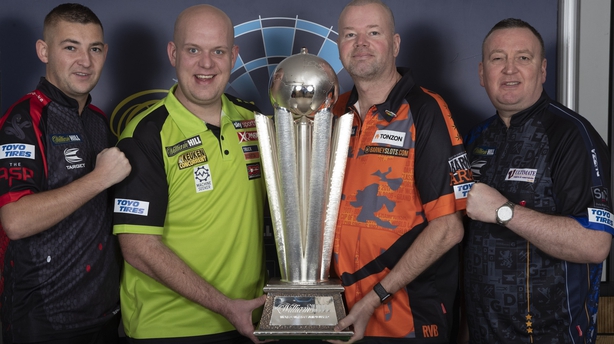 The tournament - which has 96 players from from 28 countries - also marks the end of five-time world champion Raymond van Barneveld's career.

The 52-year-old Dutchman bids adieu after enduring a painful couple of years on tour, where he has struggled to compete. He departs as a bona fide legend of the game.

A surprise run to the quarters of the Players Championship will give him the belief that he’ll get more than one memorable walk on.

He faces America Darin Young in the first round on Saturday evening.

Van Gerwen remains the man to beat. The three-time champ has never retained his title and would dearly love to hold on to his crown come 1 January.

Phil Taylor’s tally of 16 will never be touched but MVG will feel that three is not enough for a man of his talents.

Van Gerwen has already picked up the Premier League, the Masters, the Grand Prix and the Champions League among a number of other titles this year. 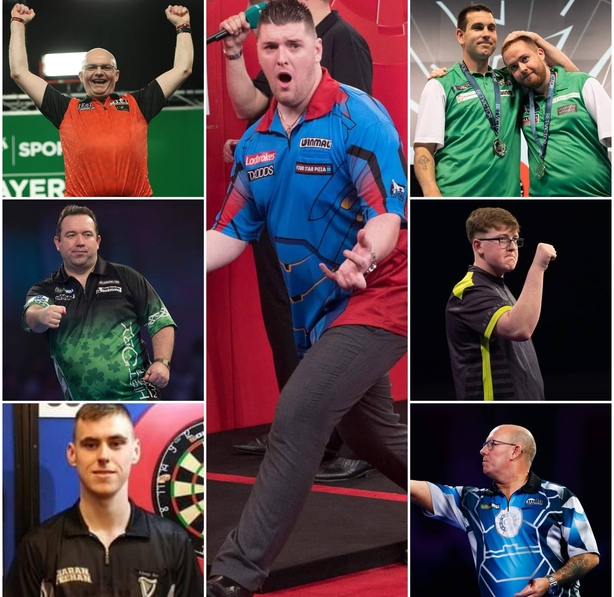 The 30-year-old takes to the stage this evening against either Klaasen or Burness and the best-of-five set format seems to be the best place to have a swing at the champ.

However, Klaasen has slipped to 48 in the order of merit and Van Gerwen’s ‘B’ game would likely be good enough no matter who he faces.

The Dutchman and Wales’ Price have been going toe-to-toe in recent weeks. The prospect of them coming through their sides of the draw for a final showdown is one to excite all darts fans.

The feisty former rugby pro won a classic Grand Slam semi-final but Mighty Mike gained revenge in the Players Championship final. There was little between the two in either contest and they are looking good for another showdown.

Japan's Mikuru Suzuki and England's Fallon Sherrock are the two women to qualify for this year's event and they will face James Richardson and Ted Evetts respectively in round one.