Derry’s Daryl Gurney is back at the scene of his greatest night in darts as the Premier League kicks off in Dublin this evening.

Last October Gurney became the first Irish player to win a major when he claimed victory at the World Grand Prix.

"I’m glad to be back," he tells RTÉ Sport. "It brings back a lot of great memories.

"Not just of that night but a great week of winning games and getting over the finishing line and picking up the trophy."

The 31-year-old shot up the rankings after the victory at Citywest and had high hopes going into the World Championships but a second-round defeat to John Henderson ended his season. 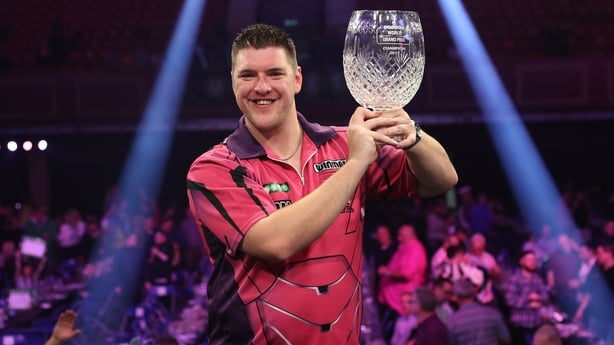 "I struggled a bit with my timing and my stance was wrong," he reflects on the loss at Alexandra Palace. "I was disappointed after the year I had."

That tournament also saw the curtain fall on the career of Phil Taylor, who made the final but fell short in his bid for title number 17 as new boy Rob Cross stole the show.

Despite coming in for some bizarre criticism from Taylor before the tournament, Gurney says he’ll miss the Power.

"It was one of them weeks that he had a go at a few people and I was just one of them," says the 31-year-old Ulster man.

"If he was playing poorly I’d say he could give it up then but I’d say he had more majors in him, but I’ll miss him because I could have [still] learned something off him, mentally."

Gurney will make his Unibet Premier League debut against Raymond van Barneveld in the 3Arena.

His form last year earned him a place in the 10-man tournament and he admits he’s come a long way in a short space of time.

"Years ago the way thing were going I didn’t think I’d ever get to the Premier League," the world number five says.

"It comes down to a mental aspect so I went home and I got a bit of help with it just getting better mentally [and it worked]."

Gurney is an ambassador for the Junior Darts Corporation (JDC) and wants to get involved in growing the sport.

"Darts is only going one way and that’s up," he says, as Ireland's first darts academy gets up and running.

"The best way is to start playing when you are young. Get them interested and they’ll dedicate themselves from then onwards

"It’s mano a mano, you against the other player. There’s no better feeling in the world.

"I know we all love watching football but that’s 11 against 11 and they’ve got their superstars and one another, we’ve just got to count on ourselves."

Cross defeated Van Gerwen in a classic World Championship semi-final a month ago before going on to claim the Ally Pally title by defeating Taylor in the decider.

Van Gerwen - who won last weekend's Masters to prepare for the Premier League in perfect fashion - has dismissed talk of being on a revenge mission when he steps on stage in Dublin.

"It would be nice to win and I'm looking forward to this Premier League," said Van Gerwen. "I don't look at the game as revenge because we're going to play each other so many times."