Sixteen-time world champion Phil Taylor survived a scare to edge Kim Huybrechts 4-3 in the last 16 of the PDC World Championships at Alexandra Palace.

Huybrechts raced into a 2-1 lead and, even after Taylor turned on the style to restore parity at 2-2, he then had his illustrious opponent firmly on the ropes in a deciding leg at 3-2.

But Taylor thrived on the drama and came through, once again averaging over 100, in the deciding seventh set as Huybrechts finally folded.

"I never thought I was out because the final set is a tie-breaker," Taylor told Sky Sports Darts. "I'm over the moon, I really am...that was the first time I've thrown with them darts and they feel fantastic. I'm going to get better. Trust me."

Despite the defeat Huybrechts was proud of his performance after pushing Taylor so close and vowed to come back better for the experience.

He said: "I played really well. I played with my heart, tried my hardest and gave Phil a good game. I'm going to be back."

Taylor will now meet Holland's Vincent van der Voort after he moved past Dean Winstanley, of Rotherham, with a 4-2 win on Tuesday afternoon.

Taylor's dramatic 4-3 triumph was the sequel to a stellar opening act in the evening session after Raymond van Barneveld bounced back from Adrian Lewis' early nine-darter to win by the same scoreline.

Lewis looked on top form as he nonchalantly greeted the feat, which gave him a 1-0 lead, but the Dutchman's grit hauled him back to 2-2 and then 3-3 to set up a deciding set as Jackpot started to stutter.

With tensions high and the crowd roaring Van Barneveld, who only managed three 180s to Lewis' 10 during the match, crucially edged in front and booked his place in the quarter-finals with a double 10 after several misses.

"I kept on telling myself 'never give up, don't give up, you've got your chances'. And I took my chances, even the last leg was so tight," Van Barneveld told Sky Sports Darts. "I'm so, so happy."

Stephen Bunting awaits the Dutchman in the last eight after he clinched a 4-2 margin over Michael Smith in the late match.

Earlier on Gary Anderson also progressed after a hard-fought comeback victory over Cristo Reyes whilst battling toothache at Alexandra Palace.

The Scottish world number four completed a 4-1 win over the 27-year-old Spaniard to set up a quarter-final clash with compatriot Peter Wright, who beat Andy Hamilton 4-0. 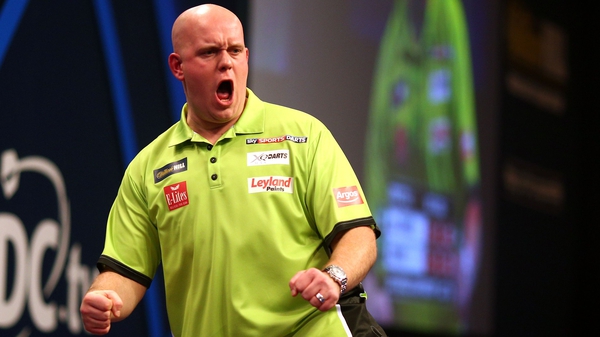