Van Gerwen took only 21 minutes to claim victory in the all-Dutch second-round clash at Dublin's Citywest Hotel, producing some stunning finishing to knock out his national rival.

The reigning champion opened the game with a 160 score and won the opening leg with a 142 finish, and though van Barneveld replied with a 136 checkout, it was the world number two who took the first set 3-1.

The second set was finely poised at one leg apiece when van Gerwen produced a killer 148 checkout, with van Barneveld waiting on 40, to move ahead before capitalising on nine missed starting doubles from his opponent in the next to win the set on tops.

Van Barneveld was then punished for missed doubles in the opening two legs of the third set as van Gerwen moved 2-0 up before posting double eight to complete a brilliant display.

"That's a great win for me," said van Gerwen. "To beat Raymond in this tournament is not easy and this will give me a lot of confidence because I played well.

"I hit the right scores at the right moments and some big finishes - I think the 148 was very important and it hurt his confidence.

"I was a bit nervous before this game but it wasn't about beating Raymond, it's also about winning the game, surviving in this tournament and hopefully winning the tournament again.

"I need to start with my doubles a bit better on Friday night but I was scoring well and hitting my finishes well."

Chisnall was punished for a slow start as Jones won the game's opening set without reply, but levelled by taking the second 3-1 and then turned the game in his favour by taking set three by the same scoreline with a key 112 bullseye finish.

Resurgent Jones fought hard to hit back in set four, but Chisnall hit a pair of double 18 finishes and took out double eight to seal his place in a first World Grand Prix quarter-final.

"I'm very happy with how I came back after that first set because it took me a while to get into the game," admitted Chisnall. "I knew that I had to improve and I did that.

"The 112 finish to win the third set was important, and for me it was the shot of the match. If I'd missed it, it would have been two-all in the third set but the bullseye was great and it was an important set to win.

"I played well in the last two sets and I was hitting my starting doubles well. I'm looking forward to playing Michael and we've had a lot of great matches before."

Earlier in the night, world number three Adrian Lewis was dumped out of the tournament with a straight sets loss to Justin Pipe, who dropped only three legs in a memorable performance. 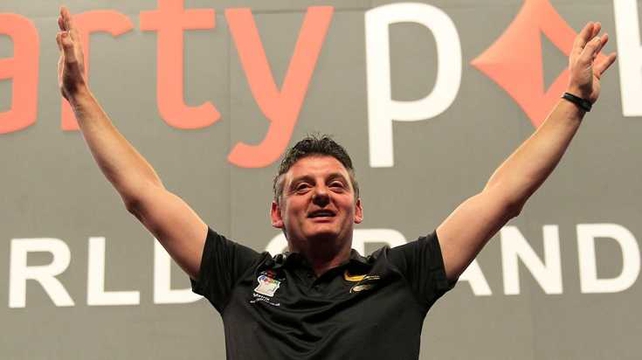 Pipe took out 142 to win the game's opening leg, and though Lewis levelled it was the world number ten who took command by winning the next two to claim the set 3-1.

He then won the second set in stunning fashion by claiming three successive legs - finishing 70 with Lewis waiting on 36 following a 180 in the opener, a 150 finish in the second and 90 on double 15, again after his opponent landed a maximum, to double his advantage.

Lewis hit back to lead 2-1 in the third set, but Pipe hit two 180s in the fourth leg as he levelled, before posting double eight in the deciding leg to seal victory by hitting 50 percent of his finishing doubles.

"I'm absolutely delighted to be in the quarter-finals again," said Pipe. "It's a fantastic result and I'm really pleased with my performance.

"Adrian didn't get going and I'm disappointed for him, but I think the big checkouts made a massive difference, and I fed off the confidence that they gave me.

"I've got to take the positives from my performance and I'm over the moon. Hopefully I can do the same in the quarter-finals on Friday night."

Pipe will face ever-consistent Andy Hamilton in the last eight, after the Stoke ace was a 3-1 winner against Kevin Painter. 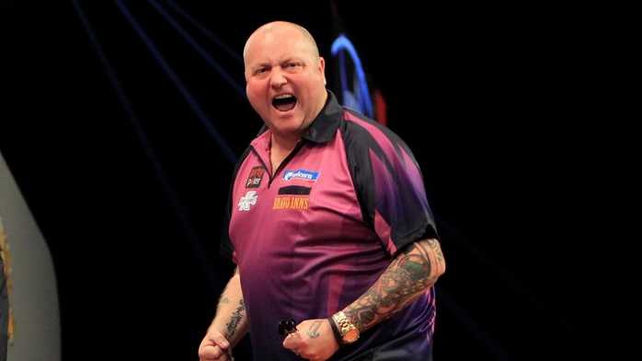 Hamilton won the game's first seven legs as he took a two-set lead before Painter took three legs of his own to take the third set.

The UK Open finalist, though, finished 90, double eight and 89 for an 11-darter as he took set four 3-1 to continue his brilliant record of reaching every major ranking quarter-final for the past 18 months.

"I felt really comfortable on stage tonight - possibly as comfortable as I ever have - and it's really pleasing to get such a good win," said Hamilton.

"I had a great start but I lost a bit of concentration in the third set and let Kevin in, and he took his chances, but I composed myself and finished him off well. I think it was a more professional performance than in the first round, I was on top of my game and I took my chances.

"I'm confident, I'm playing well and my form's good, so there's no reason why I can't go on and win this title now - that's what I'm here to do." 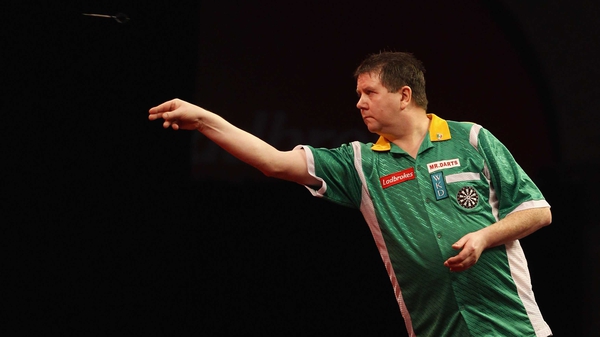