Tadej Pogacar snatched stage three at the UAE Tour to increase his overall lead on a day when Irish cyclist Sam Bennett finished more than 16 minutes down on the Slovenian.

Tour de France champion Pogacar had 43 seconds to spare over Adam Yates, who moves up to second overall, but it was a day of toil for Bennett.

The Deceuninck Quick-Step rider was hampered by cross-winds on the opening stage and failed to challenge during yesterday's time trial.

Today, the sprinter finished the mountainous stage in a time of 4:14:40, more than 16 minutes down on Yates and Pogacar. Having missed out in the two intermediate sprints, the Irishman is still seeking his first points of the race and slips down to 110th on the general classification.

The climb to Jebel Hafeet became a straight fight between race leader Pogacar and the defending champion Yates as they shook off Joao Almeida and Sepp Kuss on the 10-kilometre ascent to the first of two summit finishes in the race.

Yates, making his debut for the Ineos Grenadiers this week, made a series of attacks but could not drop Pogacar from his wheel, and the UAE Team Emirates rider then used the slight descent on the approach to the line to come around Yates and take the victory.

That pushed his advantage to 43 seconds over Yates, with Joao Almeida dropping to third, a further 20 seconds back.

Almeida, who began five seconds behind Pogacar in second, conceded 48 seconds on the climb as he reprised the familiar grimaces seen when he lost control of the Giro d'Italia in the final week last season.

With Almeida's Deceuninck-Quick Step team-mate Mattia Cattaneo sticking with him and Jumbo-Visma's Chris Harper distanced midway up the climb, Yates moved up from fifth place after limiting his losses in Monday's time trial.

Chris Froome, making his debut for Israel Start-Up Nation as he continues his recovery, was distanced by the main contenders some seven kilometres from the summit as he rode in comfortably.

The seven-stage race will continue with a flat stage on Al Marjan Island on Wednesday before the potentially decisive summit finish at Jebel Jais on Thursday. 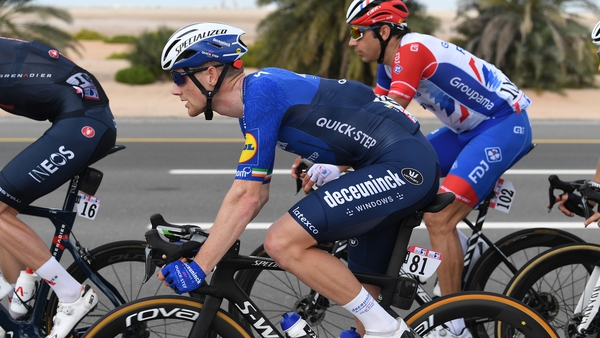