When the elder of his two boys was around nine or 10, Michael Bennett needed some advice. His son Sam was a talented cyclist around Carrick-on-Suir, initially excelling on cross-country before trying his hand at road races.

Talent wasn't the issue – the number of victories and outstanding performances were testament to that – but it was the manner of some early defeats that rankled somewhat. At times he would be swallowed up by the pack with the finishing line in sight. Why was he running out of steam?

Counsel was sought from Martin O'Loughlin, a former Irish road racer, who was aware of the budding cyclist.

"Michael said he was pretty good at most things, except sprinting," he tells RTÉ Sport. "And he was right."

The problem was immediately obvious to O'Loughlin's trained eye. The young rider was treating road races like cross-country, going to the front and attempting to burn off those around him.

It worked on occasions, but not when faced against more formidable opposition. The discipline to sit in and conserve energy was a seismic change in mentality. The results justified the shift.

"I'll always remember the second day of training, he left me for dead," says O'Loughlin.

Two decades on, Sam Bennett enters his third Tour de France as one of the world's leading sprinters with genuine ambitions of not only a stage win, but to follow in the footsteps of Waterford native Sean Kelly in claiming the pinnacle for sprinters, the maillot vert, the green jersey.

The chance to make history won't be far from Sam Bennett's thoughts.

In 107 years of the Tour de France, just three Irish cyclists have donned the maillot jaune, the leader's yellow jersey, Stephen Roche holding on to it when it mattered most in 1987, two more have won stages. This year Bennett is looking to join some exalted company.

In 1963, Shay Elliott broke new ground when he led the most famous bike race in the world, and kept it in his possession for three days. 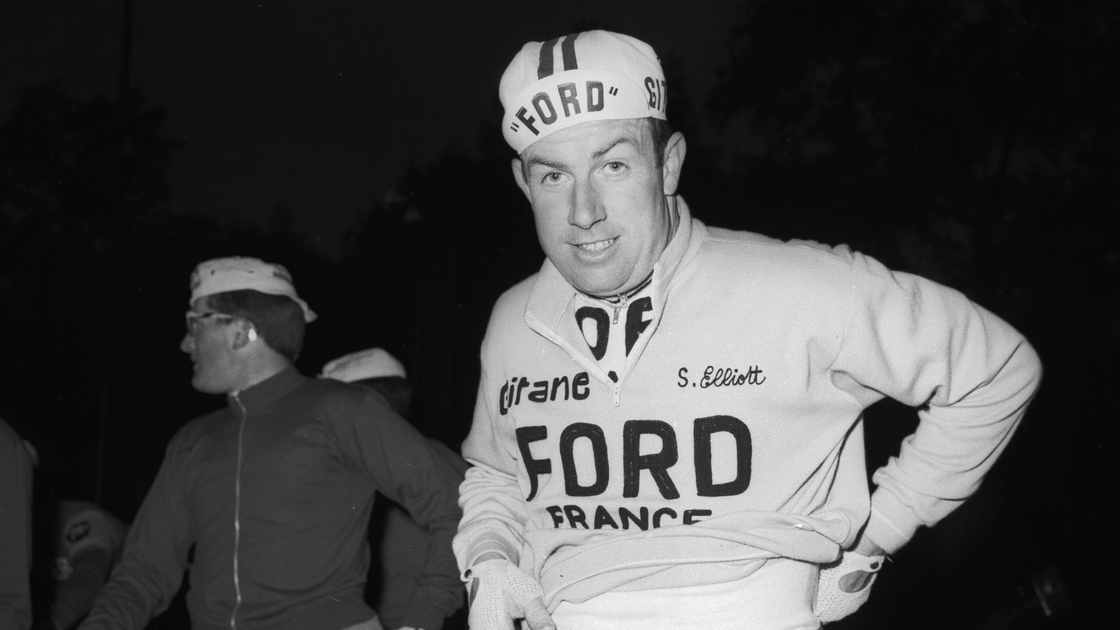 In terms of stage victories, Seán Kelly is the most successful of the lot, claiming five between 1978 and 1982 and taking the green jersey on four occasions.

Although overall victory eluded Kelly, he has serious pedigree in the race. In 1985 alone he finished second five times and third on four stages on his way to a third successive top-10 placing.

Two years later Roche reached the Holy Grail in a year that also included success in the Giro, and retired with three stage wins, while Martin Earley sprinted to a stage win in in Pau 1989. 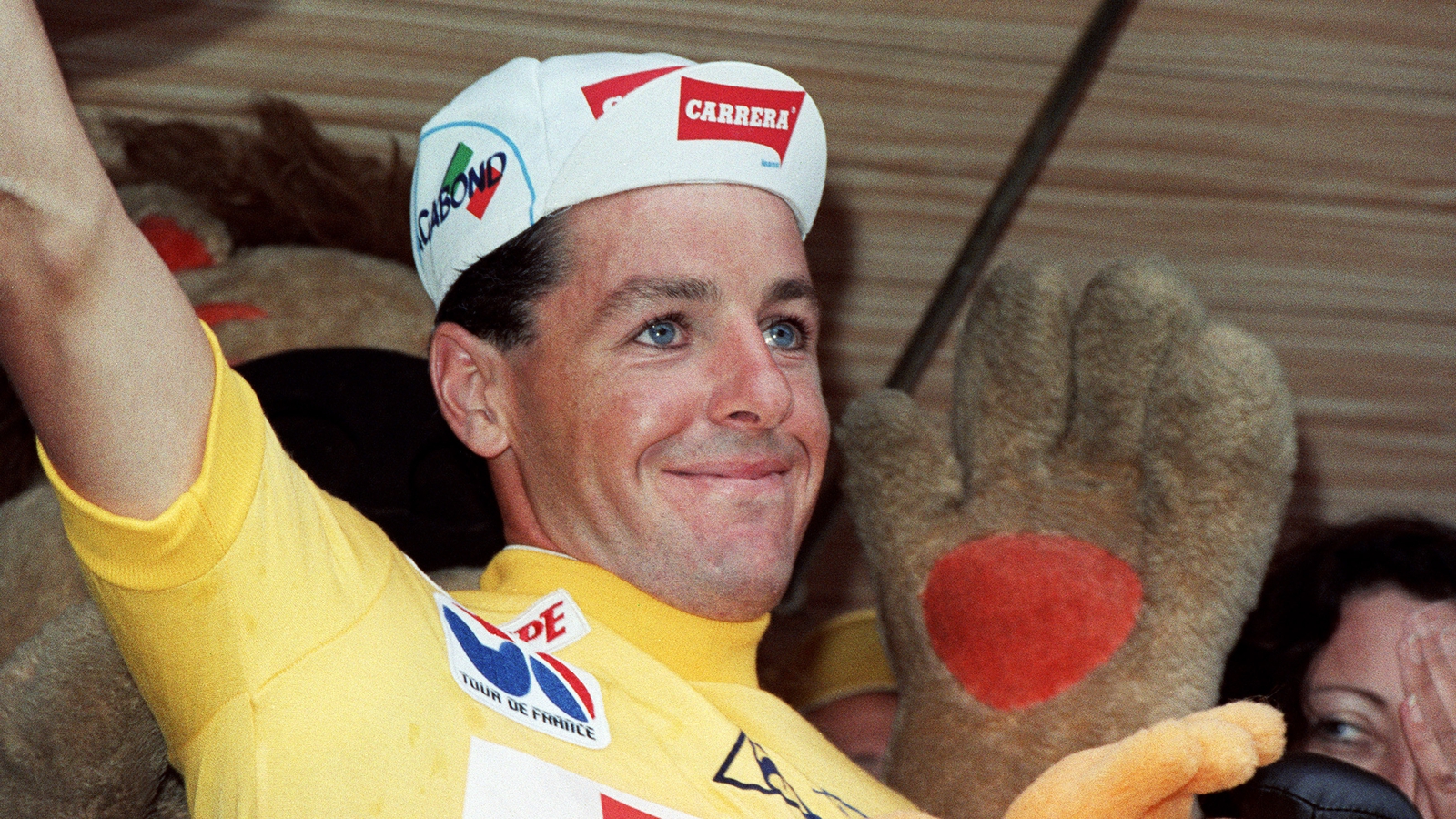 Dan Martin claimed the first of two Tour de France stages in 2013, and now 29-year-old Bennett is looking for an added piece of history; joining Elliott as the only man with stage victories in the three grand tours, the Tour de France, the Giro d'Italia and the Vuelta a España

"I think Sam will make history," says O'Loughlin, who now operates in a mentoring capacity for the Irish hopeful.

"With the condensed calendar, the sprinters have been spread out over the three grand tours and I think there are six stages he can realistically target." 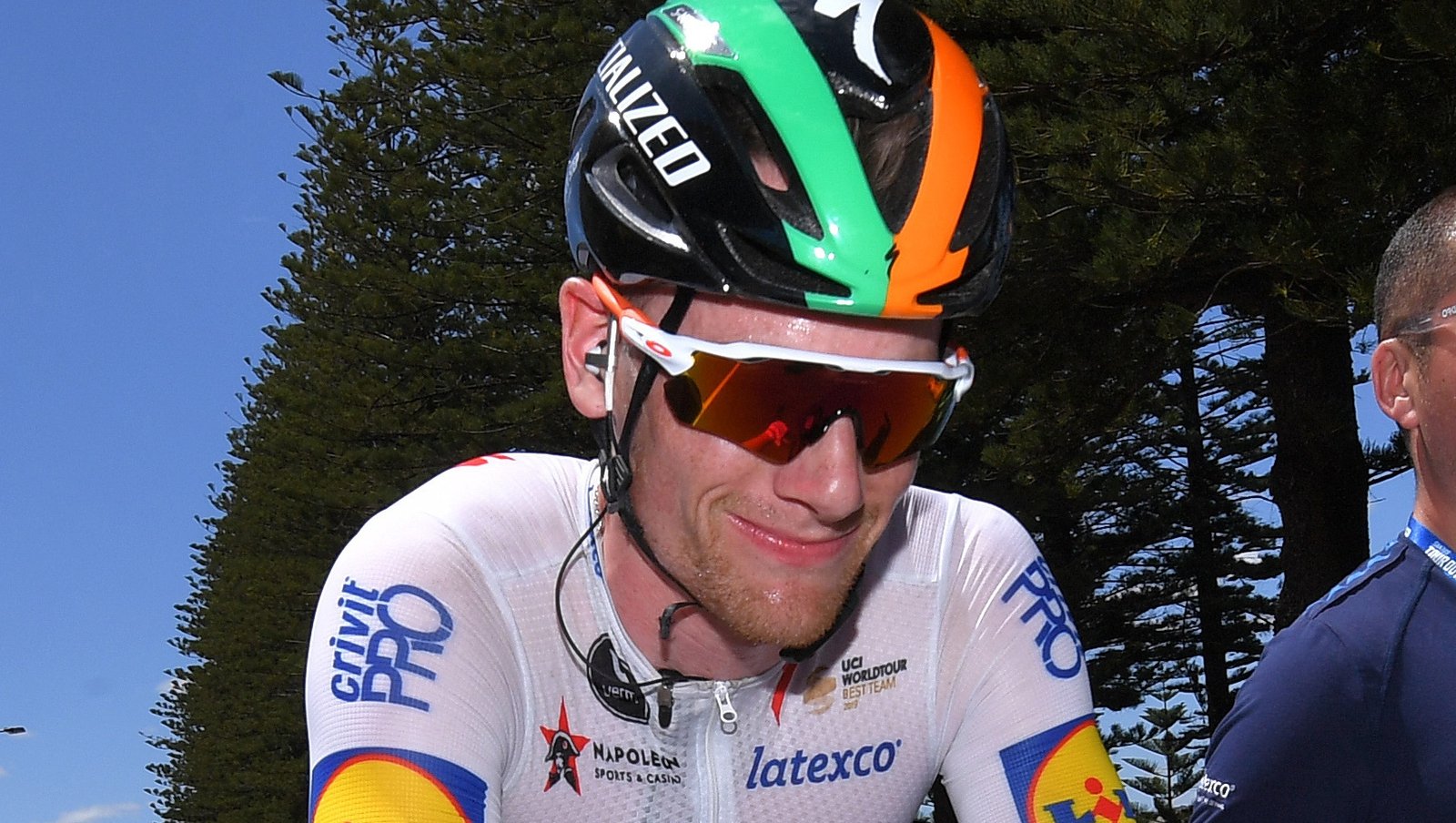 Victory in the opening stage of the Tour Down Under was a good way to begin life with a new team – after five years with BORA – hansgrohe he moved to Deceuninck-QuickStep, a Belgian team that has built its reputation on dominating in the Classics and sprints, where former employees including speed merchants Mark Cavendish, Marcel Kittel and Elia Viviani.

His form dipped somewhat afterwards, and he admitted lockdown offered the chance to reset somewhat.

His only race since the pandemic struck was the Vuelta a Burgos last month, where a stage win offered further evidence of what may be possible for the Tour.

Unlike some of the other top sprinters however, he lacks the experience of winning a stage. 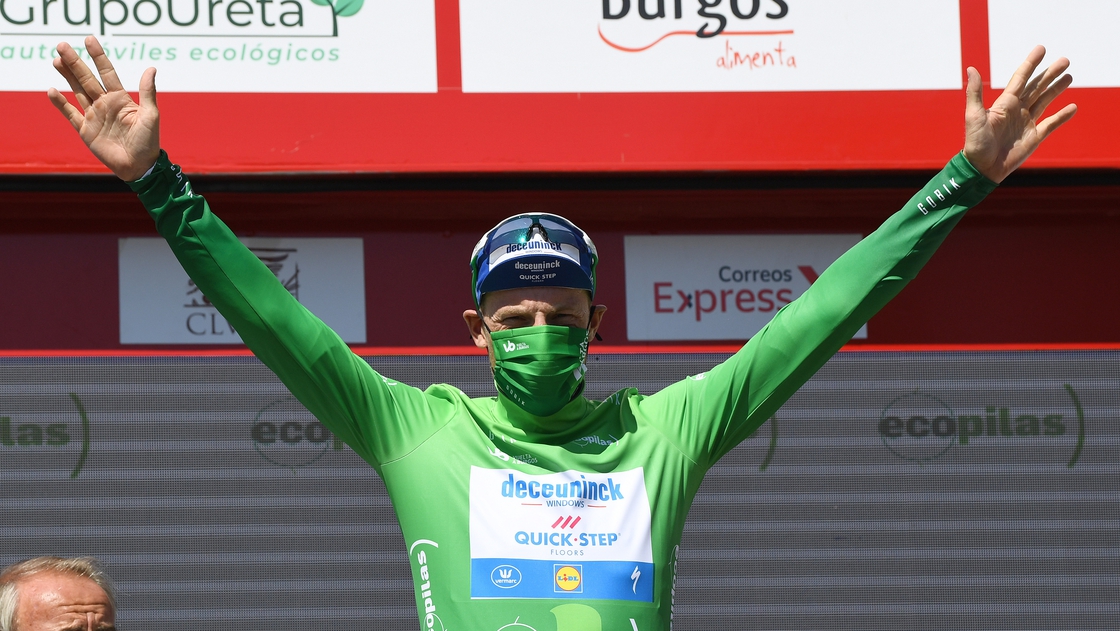 Indeed it is his four years since he last rode the iconic race and will have to banish some disappointing experiences to realise his ambitions.

On his maiden outing in 2015 a hernia in his diaphragm left the Carrick-on-Suir man unable to fuel properly and he was forced to abandon. Twelve months later, a crash on the opening day left him with a number of injuries, including broken fingers in his right hand, but ground through to the finish as the last man standing

In doing so he became the lantern rouge, the competitor who finishes last, named after the red lanterns that hang on the last car of a train. Of some consolation would have been that 12% of the starting field were too broken up to make the finish line in Paris. 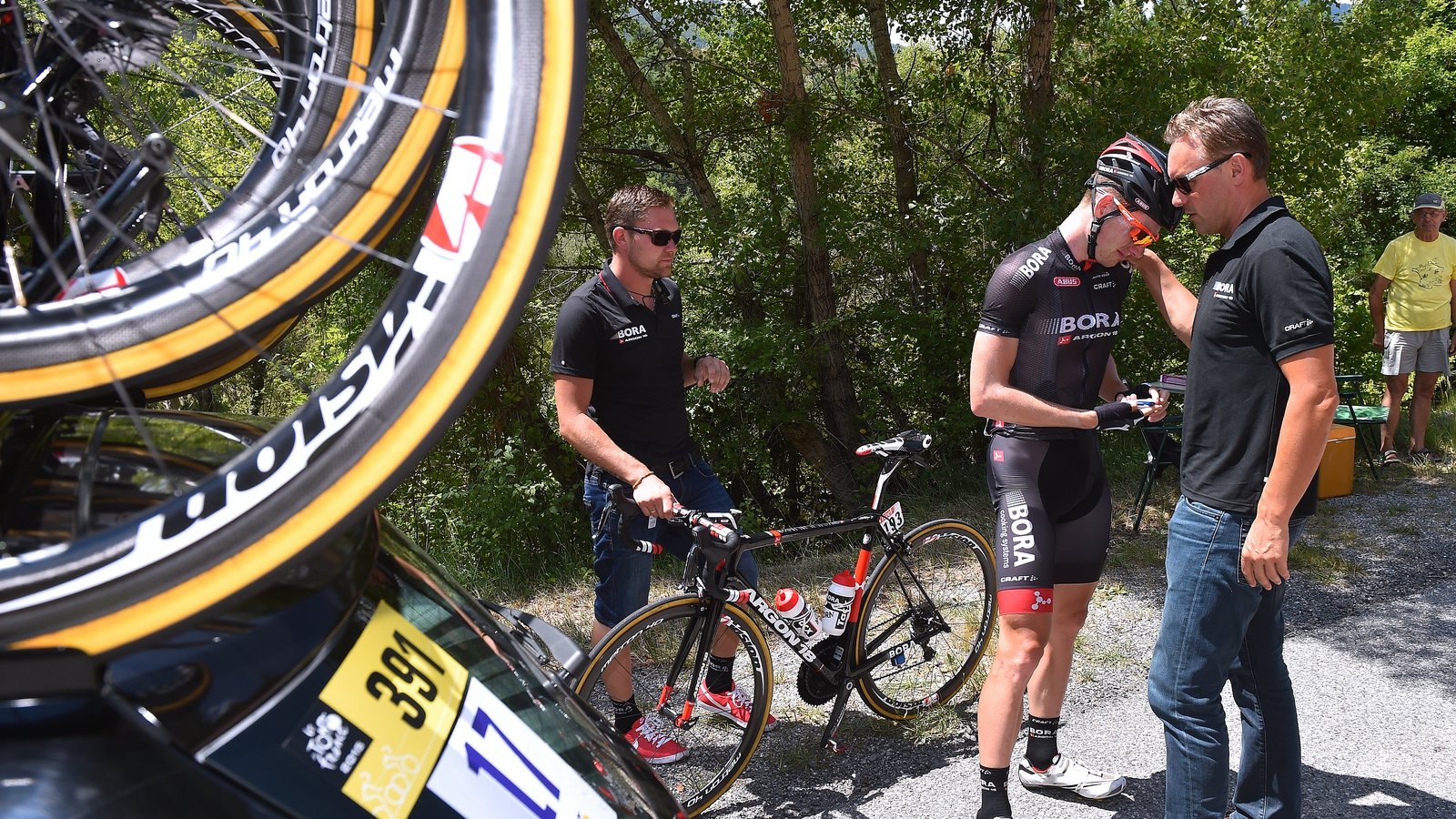 Since then Bennett has enjoyed some much brighter days in the saddle.

Three stage wins at the 2018 Giro d'Italia meant he was the first Irish cyclist since Sean Kelly 30 years previous to win multiple stages on a Grand Tour and soared even higher in a spectacular 2019 that included 13 stage wins and a double victory at the Vuelta a Espana.

Team leadership at QuickStep will be split with local hero Julian Alaphilippe, with a two-pronged strategy most likely. Alaphilippe, who spent 14 days in yellow last year, much to the delight of the French fans, before being overtaken, will eye another crack at the general classification, with the Irish sprinter focusing on green.

Should Alaphilippe replicate the kind of form he did last year and challenge the pre-race favourites Primoz Roglic, defending champion Egan Bernal, Tom Dumoulin, Richard Carapaz and a more likely French winner in Thibaut Pinot, what would this mean for Bennett's chances of success?

O'Loughlin suggests a bad start for the Frenchman could prove advantageous, with stage victories then the focus for Alaphilippe, though Examiner reporter Brian Canty, who has followed Bennett's career closely, offers an alternative viewpoint.

"I think it would be good for him [Bennett] if Alaphilippe did well, as it would take the pressure off to a certain extent, with all the focus on the home rider." 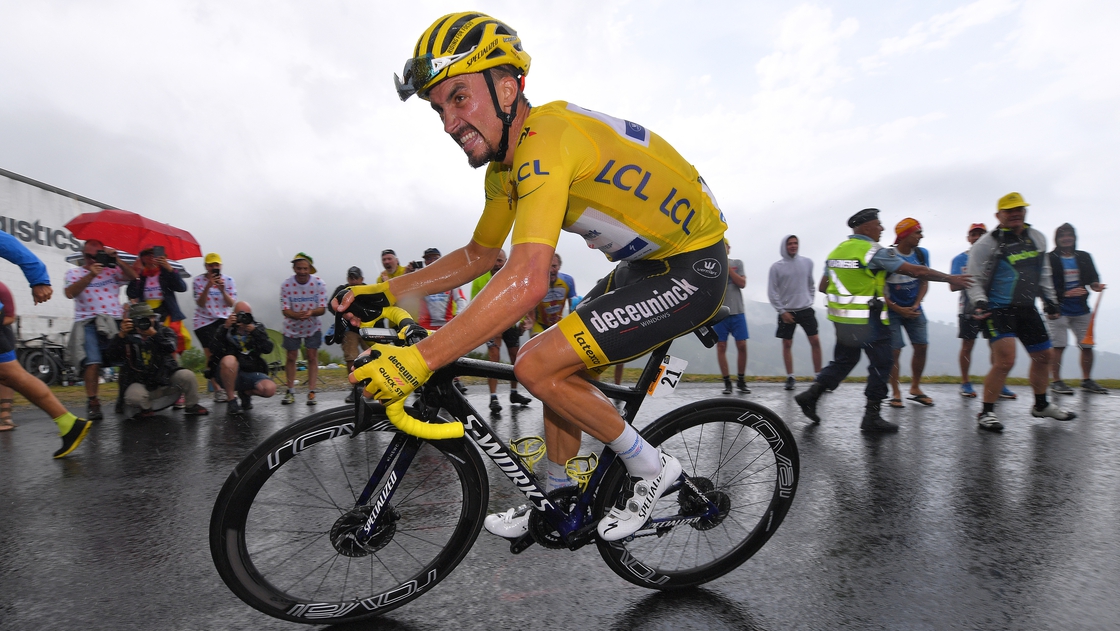 Sam has ferocious two-minute power, so he doesn't need to wait until the last 200m to make his move

While overall victory isn't part of the plan, the layout of the route means he is realistic contender for yellow on the first day.

The 2020 Tour is Alps-heavy, with eight mountain-top finishes and one crucial mountain time trial. "Brutal" was Chris Froome's description of the route when it was announced, though he has not made the cut at Team Ineos to challenge for a fifth title.

Climbing is the key word. Last year's gradual start seems far removed from the 2020 route, even the first stage in Nice, billed by organisers as a sprinter's stage, contains four lumpy climbs.

It is terrain that Bennett has trained on numerous times over the years and looks capable of putting himself in the mix for glory. In July he won the fourth and final stage of the Vuelta a Burgos, a sprint stage but with an almost entirely uphill final kilometre.

"He took off with a mile to go uphill. He just attacked and blew the field asunder. He has ferocious two-minute power, so he doesn't need to wait until the last 200m to make his move," says O'Loughlin. His fourth stage win of the season came in Belgium earlier this month.

The theory that the opening stage represents his best chance isn't one that Canty necessarily subscribes to.

Proud to be starting the @LeTour this weekend with @deceuninck_qst
It will also be a dream to ride it representing the Irish national champs jersey. Let the race begin!🍀 pic.twitter.com/qHNbymZ1KS

"All the riders are fresh for the first stage of the Tour. Everyone feels they have a chance."

And what are Bennett's chances of following in the footsteps of Kelly in green?

A cursory glance at the bookmakers has him only behind former Bora-Hansgrohe team-mate Peter Sagan - the man who effectively blocked his path to the Tour - who is bidding to claim victory in the points classification for the eighth time.

Belgian Wout Van Aert and Australian Caleb Ewan are the other leading contenders, though Bennett is the outlier in one sense; the others boast 16 stages between them, the majority of those belonging to Sagan.

"It's going to be down to those four," says O'Loughlin. "Sagan has serious power, but I believe if it's a straight line sprint between the two, Sam will win."

Bullish talk perhaps given three-time world champion Sagan has taken the green jersey in seven of the last eight years – in 2017 he was controversially disqualified for throwing an elbow in a move that the UCI later determined was "unintentional" - while Elia Viviani is also likely to be the mix, the Cofidis rider who claimed a stage in 2019 on his way to finishing third in the points classification

Another string to Bennett's bow is the presence of Michael Mørkøv as his right-hand man. The 35-year-old Dane will ride as the last man for him in the sprint lead-out and Canty believes the importance of this cannot be underestimaterd.

"Mørkøv is a track specialist. His job is to basically get Sam to the line and is phenomenal at what he does."

Endurance, as ever will be crucial in navigating the gruelling 3,470 km over 21 days of racing. Survival is imperative, but that's not enough for those with ambitions of getting on podiums.

Last year's winner Egan Bernal finished with an average speed of just over 40km/h after more than 82 hours of pedalling. Nils Politt recorded a top speed of 101.5kph on a white-knuckle descent of the Col de Vars.

Bennett is by some distance the least experienced of the Irish trio involved. 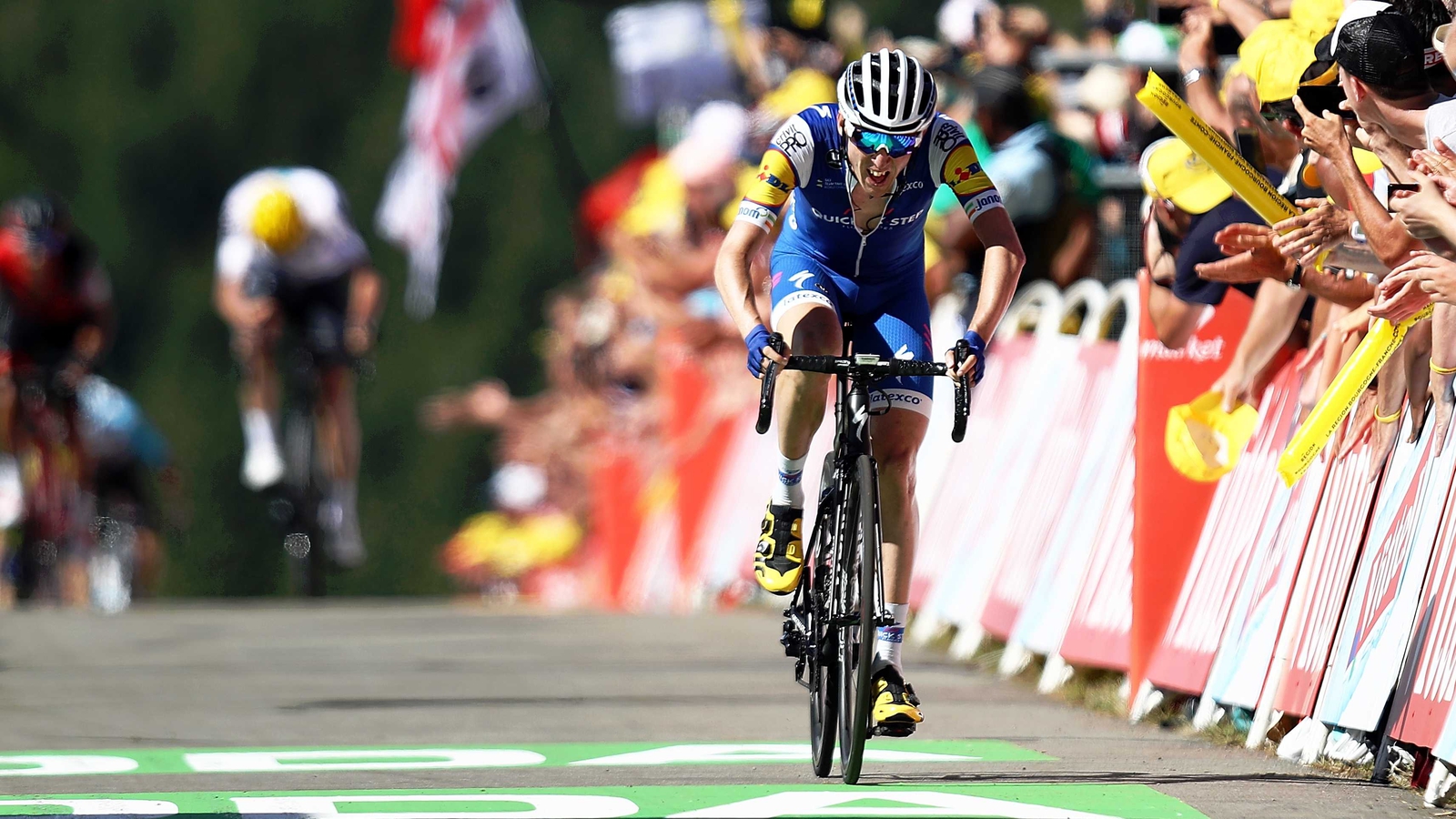 Nicolas Roche equals his father Stephen's 10 starts in the race, while his cousin Dan Martin is set for his eighth Tour. Sixth in 2017 has been the Birmingham-born rider's best finish to date, though his famous pain threshold will be tested just two weeks after fracturing a bone in his lower back.

Three successive top 10 finishes were followed by 18th last year, but Martin indicated last month that his team are targeting stages rather than the general classification. "The team are encouraging me to shoot for stages now, I'm looking forward to that approach," he told the Irish Times.

Bennett however is focused on what he has to do and is in a good place. He got married last year and spent lockdown back in Ireland, testing his mettle with repeats of Seskin Hill and it's 9% average gradient.

He will also not be short of support. His popularity in Belgium - Bennett was born in Flanders where his father Michael played professional soccer for local club Eendracht Wervi – has increased since joining a Belgian team in Quick-Step.

"It really feels like my whole career has been a build-up to this moment and this opportunity, and I feel quite a bit of pressure in that sense," he said earlier this week.

"It would mean a lot to get a stage win here. It would settle me as a rider and make me a lot more confident."

O'Loughlin says he would be "surprised" if Bennett doesn't join an exclusive club of Irish stage winners.

"I think he certainly can," agrees Canty. "I think he would be extremely happy if he won a stage, and then who knows?

"Riders tend to win more after a first stage win with the confidence it brings." 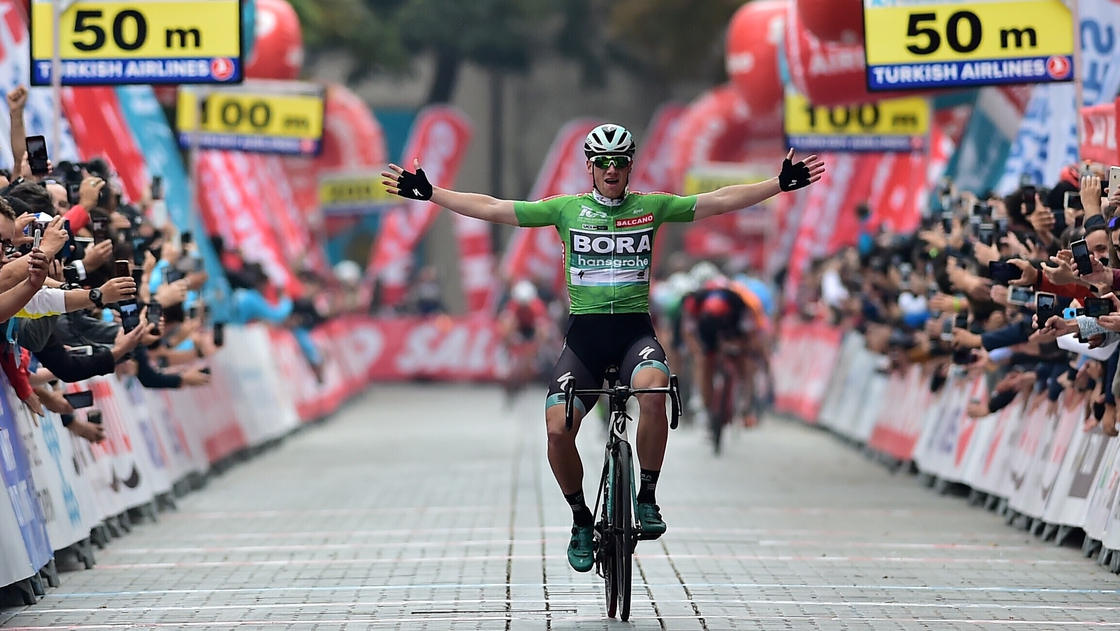