Bradley Wiggins believes Team Sky's dominance on the road and the controversies surrounding the team have led to a "negative" atmosphere in the sport.

The former Sky star was speaking to reporters at a London event to announce the new roster and suppliers for Team Wiggins, the outfit he set up in 2014 to help the British team pursuit squad prepare for Rio 2016 and has since become one of cycling's best under-23 teams.

The overall atmosphere at the event was upbeat and Wiggins was happy to answer questions about the team from the evening's compere during an on-stage interview.

But the five-time Olympic champion and 2012 Tour de France winner was less willing to answer questions from reporters about Team Sky, their star rider Chris Froome's adverse test for an asthma drug or UK Anti-Doping's investigation into an allegation he broke anti-doping rules in 2011.

Wiggins, however, did make several unflattering references to his former team during his on-stage interview, including one piece of advice for Team Wiggins' star signing Tom Pidcock.

"Go somewhere else, because they'll ruin you."

When asked about these comments later, Wiggins said: "They are not barbed jokes or digs, that's the reality of the sport at the moment.

"I saw the reports only last week from (the Ruta del Sol in) Andalusia, or wherever it was, and they are the best team in the world. How many races did they win last week?

Asked if he had an opinion on the decision made by Froome and Team Sky to keep racing while his adverse analytical finding case is resolved, despite widespread criticism of the decision from within the sport, Wiggins said he did not have an opinion on it.

He also refused to elaborate on his November threat to sue UKAD for what he described as a "malicious witch hunt" but did say: "I'm going to have my say on that very soon."

Wiggins' original threat came after UKAD announced it would not be proceeding with an anti-doping violation as it had been unable to either prove or disprove his and Team Sky's account that he had taken a legal decongestant at the end of the 2011 Criterium du Dauphine and not a banned corticosteroid, as had been alleged.

Britain's most decorated Olympian was far more forthcoming about his ambitions for Team Wiggins, which he wants to become the world's best finishing school for aspiring pros and "the people's team" - a throwback to road cycling's more accessible, egalitarian and relaxed past.

Setting up a women's version of the team is his next big target but he does not harbour any immediate plans to take the team into cycling's WorldTour top flight.

One of the key reasons for this are the costs associated with such a move.

Asked if the sport would benefit from a salary cap to lower barriers to entry and improve the competitive balance, Wiggins said: "Maybe, because something has got to happen.

"Sky are running away with it. With the office blocks they bring with them (to races), it's the difficult to compete, isn't it?

"Whether that helps performance or not, I don't know. Going forward something has to change to even it out a bit." 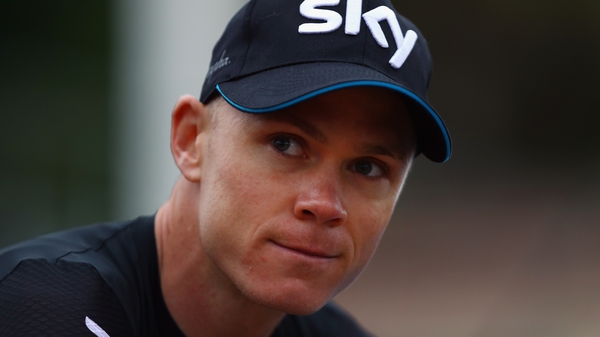