Movistar's Alex Dowsett stormed into the race lead of the Friend's Life Tour of Britain as Matthias Brandle collected his second consecutive stage victory in another breakaway.

Englishman Dowsett began stage six one minute 25 seconds behind Omega Pharma-Quick Step's Michal Kwiatkowski in the general classification but got himself in the break along with IAM Cycling's Brandle and Tom Stewart of Madison Genesis, and together they entirely changed the shape of the Tour.

Dowsett showed no interest in contesting Brandle for the stage victory on the final straight, knowing his job was done as he took the lead in the overall standings.

It was just reward for a rider who put a huge effort into a breakaway on stage four, only to have all his hard work undone by a double puncture.

Dowsett now leads Kwiatkowski by 34 seconds, with the Italian Eduardo Zardini (Bardiani) 40 seconds behind in third and Ireland’s Tinkoff-Saxo rider Nicolas Roche 50 seconds back in fourth.

Capitalising on the time trialling skills of both Brandle and Dowsett, they built a lead of more than nine minutes on the road, and the peloton rarely looked capable of bringing it back despite some frantic efforts from Omega Pharma-Quick Step in the closing stages of the challenging 205.6km run from Bath to Hemel Hempstead.

"It was the hardest day of my life," Dowsett said on ITV4. "I just thought they were letting us out to bring us back and I was a bit hacked off with myself because I thought I could have a good time trial but I was leaving a lot out on the road and I might have given too much.

"Once the gap went up to seven minutes I thought, that's quite big, then it was eight, nine, and I really started digging in.

"I spoke to Matthias and we made an agreement he would go for the stage because I knew there was a good chance I would take yellow and it was a risk I was willing to take.

"He gave me everything. I couldn't have done it without him and Tom too from Madison Genesis. He probably had the hardest day of his life, he gave all he could and I'm grateful to him."

The break's lead reached 9mins 15secs with a little over 87km to go before the peloton stepped up the chase.

Omega Pharma-Quick Step and Team Sky were prominent on the front, but they had left themselves too much to do.

The gap dipped under five minutes with 33km to go, but it was not coming down quickly enough and there was a lull in the chase as teams began to look at each other.

As they moved inside the final 10km it was Kwiatkowski on the front, desperate to keep his yellow jersey, but it would prove to be in vain.

Defending champion Bradley Wiggins had been focused on keeping himself there or thereabouts until the final time trial on Sunday, but while Sky took the odd turn on the front, they were barely seen towards the end of the day and Dowsett's move leaves Wiggins with much work to do on Saturday's 226.5km run from Camberley to Brighton, sitting 62 seconds down in seventh place. 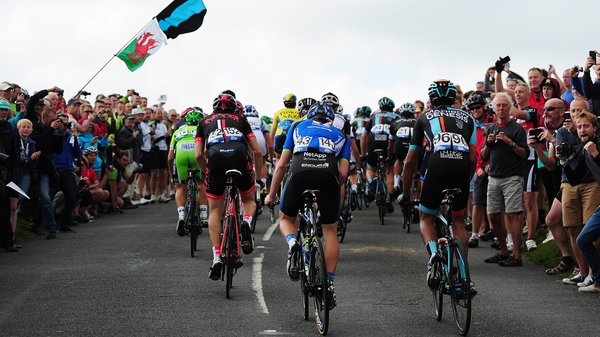