Nicolas Roche remains in fourth place at the Tour of Britain after finishing ninth on today’s fifth stage.

The decisive moment of the 177.3-kilometre route from Exmouth came not on Dartmoor, but on the drag into Exeter up Stoke Hill, with Brandle prevailing.

Brandle won by eight seconds from second-placed Archbold, who beat Wynants in a two-up sprint, while Bardiani CSF's Sonny Colbrelli led the peloton in 14secs behind in fourth.

Wiggins remained sixth overall, 27secs behind Kwiatkowski, ahead of Friday's sixth stage, the 205.6km from Bath to Hemel Hempstead.

The day's racing included an ascent of Haytor on Dartmoor, but the action ignited within sight of the finish.

Garmin-Sharp initially led the pursuit on the run-in into Exeter, before the other teams with overall contenders shared the workload.

The quartet's advantage was tumbling as the peloton closed in with every revolution on the approach to Stoke Hill.

Omega Pharma-QuickStep, BMC Racing, Team Sky, Tinkoff-Saxo and Bardiani CSF all jostled for position as they tried to reel in escapees.

Dylan van Baarle (Garmin-Sharp) accelerated out of the peloton on the lower ramps of Stoke Hill in an attempt to bridge the gap to the quartet.

Brandle surged into the lead ahead of his fellow escapees as, behind him, Van Baarle was caught and Roche, now 14 seconds off the lead, attacked.

The Irishman's move was marked by his overall rivals, whose jostling prevented a coherent chase and saw Brandle win. 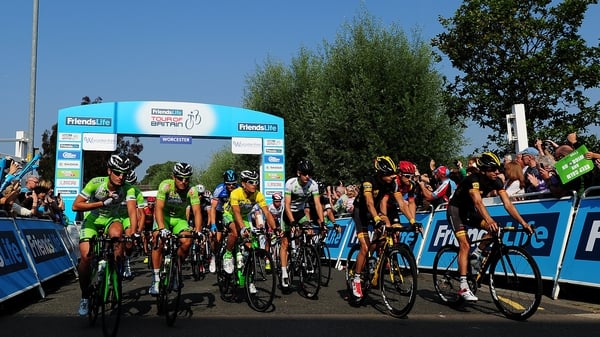