Norway's Alexander Kristoff claimed his second Tour de France victory when he won a bunch sprint to take Sunday's 15th stage after the peloton reined in the day's breakaway in the final straight.

New Zealand's Jack Bauer, who broke clear with Swiss Martin Elminger, was caught by the chasing pack less than 100 metres from the line.

Bauer, who finished 10th after seeing the sprinters whizz past him, was in tears after his 222-km effort came to nothing in the final metres.

Katusha rider Kristoff, who won the 12th stage on Thursday, won the race to the line as he edged out Australian Heinrich Haussler and Slovakian Peter Sagan, second and third respectively.

Italian Vincenzo Nibali stayed safe in a bunched finish and retained the overall leader's yellow jersey in an unchanged top 10.

"It would be hard to compete but it would be great to win in Paris, but I have to beat extremely strong riders" - Alexander Kristoff

"I thought it was a little bit too late, I thought I'd have to go for second but I was relieved that we caught them," said Kristoff.

"I was a bit surprised I could take the win today. Maybe they had heavier legs than me after the Alps."

After two tough stages in the Alps, there was no respite for the peloton, who rode through storms and heavy rain in dim and dusky conditions.

With swirling winds that sometimes threatened to split the peloton, it made for a nervy day as the Tour prepares to enter its final week.

With a series of roundabouts making it hard for the sprinters' teams to organise themselves in the finale, Bauer and Elmiger believed they could hold off the chasing pack.

But their hopes were dashed when the Giant-Shimano team, looking to set up Marcel Kittel, took control and upped the pace.

The German, who has won three stages in this year's Tour, had nothing left in the tank after struggling in the Alps and took 11th place while his compatriot Andre Greipel was fourth.

Greipel and Kittel are slightly heavier than Kristoff and therefore struggled more with the long, demanding climbs of the Tour's 13th and 14th stages.

Another German, time trial specialist Tony Martin, tried his luck some two kilometres from the finish, but his effort lacked conviction.

Kristoff, who won the Milan-San Remo classic this year, is now eyeing a win on the Champs Elysees on the final day of the Tour next Sunday.

"It would be hard to compete but it would be great to win in Paris, but I have to beat extremely strong riders," he said.

Monday is the second rest day of the Tour. 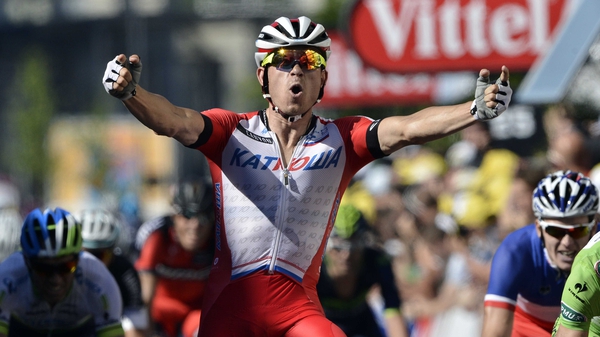