Vincenzo Nibali will head into the Alps with his hold on the yellow jersey intact after maintaining his two minutes 23 seconds lead over stage 12 to St Etienne today.

Nibali was safely tucked in the peloton along with his nearest challengers Richie Porte (Team Sky) and Alejandro Valverde (Movistar) who retain second and third places respectively in the overall classification.

Kristoff said: "It is a great feeling - I have been dreaming about this since I was a small child and to finally achieve it is nice. There will be champagne tonight but tomorrow is a hard stage so there cannot be too much party."

Clarke formed part of an early five-man breakaway which was gradually hauled back until the Australian and Sebastian Langeveld were left to set the pace up front.

Langeveld had recovered from a crash which saw another Tour casualty in young Catalan rider David De La Cruz (TeamApp Endura), who was forced to abandon with a broken collarbone.

When Langeveld dropped back Clarke was joined by Gautier for the final and ultimately fruitless push towards the finish.

Clarke said: "It was really hard out there and we just had to bide our time for most of the day and really wait until the start of the two climbs.

"Sebastian and I were pretty organised to give it everything but unfortunately we needed maybe one minute extra. We gave it everything we had and sometimes you need a bit of luck on your side."

Good work by Sagan's Cannondale team-mates looked to put the Slovakian in pole position to take his overdue first stage win of this year's Tour but instead it was Kristoff who pounced to give Katusha their first success.

De La Cruz was not the day's only casualty as Garmin-Sharp team leader Andrew Talansky finally succumbed to the back and hip injuries which saw him finish a long way behind the peloton on Wednesday's 10th stage.

A team statement from Garmin-Sharp read: "Andrew came into this Tour in excellent condition. He has been suffering the effects of some very heavy crashes.

"We are proud of his ride yesterday, of his tenacity and his courage. He was determined to finish the stage, no matter how far back he was, and he gave the nod to his team-mates to go with the plan of going for the stage.

On Friday the Tour heads into the Alps for the first time this year with the 197.5 stage from St Etienne to Chamrousse, including the 1,154-metres Col de Palaquit.

And Porte, who assumed leadership of Team Sky following Chris Froome's injury-enforced withdrawal, is looking forward to the challenge of cementing his position among the leading group.

Porte said: "The last two days have been anything but easy and suddenly it's got hot - it's just nice to get through these stages and tomorrow into the mountains.

"I think we've still got some strong guys for the climbs - obviously we've lost Xabier [Zandio] and Chris Froome and it does hurt having two men down but I think we'll be fine.

"It's a big opportunity and it's not an easy two days coming up. I think it's going to be absolutely crucial for the general classification so I'm looking forward to taking more time on the guys behind me." 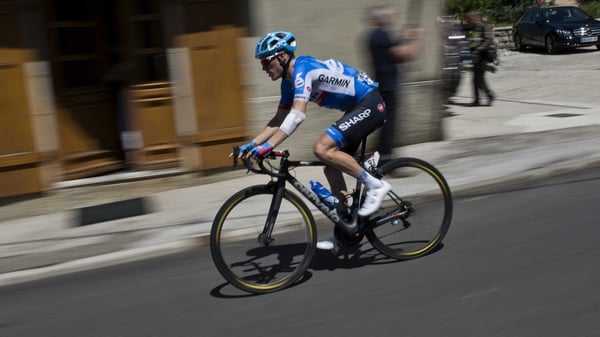