Irvine, who won a silver medal in the scratch race on Friday, lapped the field once, and won three of the maximum sprint points, to finish sixth in an event where the medals were decided between riders who had gained three laps’ advantage.

Next up is Caroline Ryan, racing in the 25km women’s points race, which starts at 12.50am (Sunday) Irish time.

Ryan won a bronze in the event at the 2012 World Championships in Melbourne.

Speaking after his race Irvine said that overall he was happy with his Championships, especially, considering his recovery from a heavy crash at the Ghent Six-Day, in November.

He said: “After Ghent I did nothing up to the New Year, very little anyway. I’m delighted to be featuring over here; it was great to get on the podium.”

The scratch silver medallist is known for riding an aggressive race, so he was not too pleased with how the points race panned out saying:

“In the Scratch Race, I seem to have the knack. I wasn’t really focusing on the Pursuit, but knew I was as good as anyone in the bunch races.

“The points wasn’t a great race. I was a passenger for a lot. When I went people wanted to go with me, but it was a stop start race, and I was a bit over-geared. My legs were screaming at me!”

Towards the end of the race Irvine attacked, and gained a lap, before attempting to gain a second lap, as three riders had already lapped the field twice, including Colombian Avila Vanegas, Irvine said “I felt I could do something, but it feels like a bad day when I’m not attacking.

"If I had taken the lap it could have been a podium, but you can’t win them all. It came back because I wasn’t accelerating, I was just holding on.

"That was the first world title for the Colombians here, he is a hero! My ear drums are still hurting from the cheers.”

Tomorrow morning Irvine flies back to his base in Denver, USA, where he will recover before switching his attention to the road.

He leaves for the Tour of Taiwan next Wednesday with his Team United Healthcare ProCycling Team. 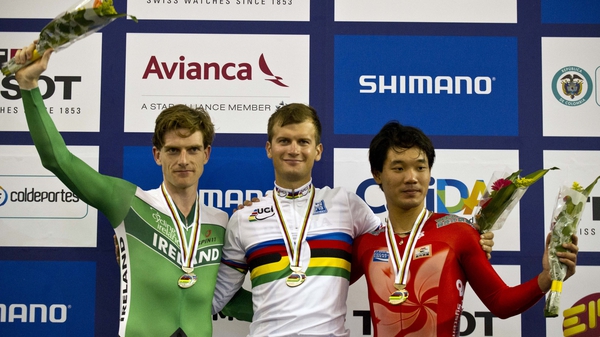