Ireland's Nicolas Roche won a four-man sprint at the end of the second stage of the Vuelta a Espana from Pontevedra to Baiona.

The Saxo Bank rider proved strongest up the final climb on the 177.7km stage to win in a time of four hours, 37 minutes and nine seconds.

Roche won by two seconds from Spaniard Daniel Moreno of the Katusha team.

"This is really liberating for me, I've only won eight races in my career but I've had so many second places," said Roche, whose father Stephen won the Tour de France in 1987.

"Roche is the rider who's always in the front but never able to win. I'm over the moon."

Roche added: "I did the Tour this summer working for (Spanish team mate) Alberto (Contador), but I've always had the Vuelta as a target for the last five years and this year was no different.

"I might finish fourth, fifth or sixth overall in Madrid, but this is what counts for now."

Italian Domenico Pozzovivo, of Ag2r, came home third ahead of Czech Leopold Konig who had led the initial breakaway on the final uphill.

But Konig could not respond when the three riders pulled him back and the Netapp-Eundura rider had to settle for fourth across the line.

Italian Vincenzo Nibali, winner of the Giro d'Italia, claimed the overall lead on the first proper stage of the race following yesterday's team time trial which had been won by Astana to put Janez Brajkovic in the red jersey.

But as the Slovenian failed to hold on to top spot his team-mate Nibali, who had vowed to add the Vuelta title to his Giro win earlier this year, took over at the top of the standings.

Nibali, winner of the Vuelta in 2010, crossed the line 14 seconds down on Roche in 16th place to claim the red jersey ahead of stage three which will see the riders race 184.8km from Vigo to Vilagarcia De Arousa.

Nibali heads the overall classification by eight seconds from Roche who is two seconds in front of Radioshack trio Haimar Zubeldia, Christopher Horner and Robert Kiserlovski.

Brajkovic dropped down to 16th overall at 37 seconds behind his team-mate and new red jersey wearer Nibali.

Martin currently sits in 40th in the overall standings, some 1:41 off the top spot. 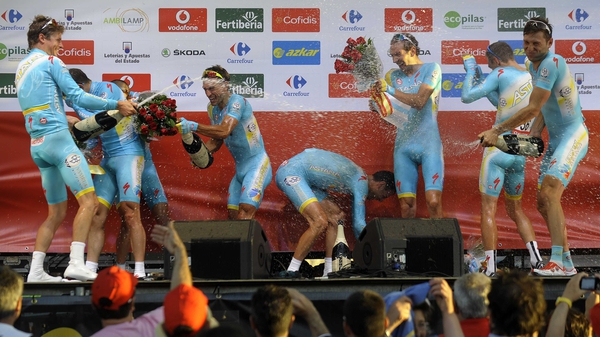