Vincenzo Nibali's Astana won the team time-trial which opened the Vuelta a Espana to thrust Janez Brajkovic into the race leader's red jersey.

Astana won the 27.4-kilometre test from Vilanova de Arousa to Sanxenxo in 29 minutes 59 seconds to put Brajkovic at the top of the general classification rankings heading into tomorrow's first road stage, the 177.7km route from Pontevedra to Alto Do Monte Da Groba.

The finish in Baiona will be the first summit ending of the race and could result in a change of leadership.

Slovenian Brajkovic took the first red jersey of the 2013 Tour of Spain as his Astana team, which includes Giro d'Italia champion Nibali, won by 10 seconds from the RadioShack Leopard squad, which includes time-trial specialist Fabian Cancellara.

Nicolas Roche and Team Saxo-Tinkoff came home in sixth, 32 seconds back, while Dan Martin's Garmin-Sharp team were 1min 41secs off the pace.

"It was a great time-trial," Nibali said on cyclingnews.com.

"The team was fantastic. My condition is very good but the Vuelta is very hard and long, and has some very important stages. We'll have to see day by day." 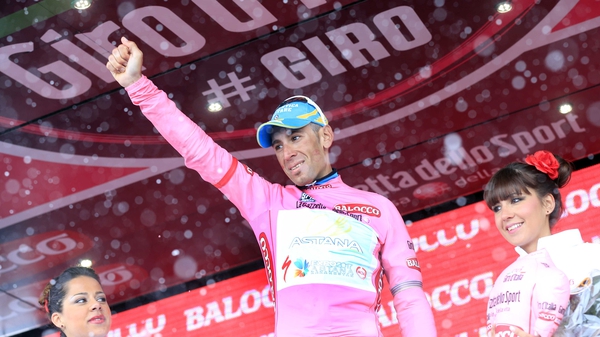