England took an alarming fast track to an Ashes whitewash with a 281-run defeat inside three days in the final Test at the SCG.

Alastair Cook's hapless tourists arguably plumbed new depths in an already embarrassing campaign as they collapsed yet again, in notional pursuit of a world-record 448 to win, to 166 all out.

Ryan Harris took five for 25, and Mitchell Johnson (three for 40) finished his outstanding series with 37 wickets as England simply succumbed once more.

They still had feasible prospects at tea of extending their struggle into another day, with opener Michael Carberry top-scoring on 43 - but then lost four wickets for eight runs in 11 balls, right up there with some of their previous humblings in an awful campaign.

Ben Stokes, the only success story of England's shocking winter, put collective failures into context again - batting on a different plane to his team-mates with some toweringly defiant hits off Nathan Lyon.

Yet ultimately, still only in his third Test in the debris surrounding him, the all-rounder was unable to make any difference to the dispiriting outcome.

Chris Rogers had completed his second century in successive matches, in Australia's 276 all out, leaving England half a Test to try to improve by almost 100 runs on their best total in nine sorry attempts.

Instead, they lasted just 31.4 overs before the long-anticipated 5-0 trouncing - their second in three tours - became an uncomfortable reality.

Cook's miserable tour concluded when he fenced at a rapid short ball from Johnson, and edged behind, before Ian Bell - up to number three at last - followed a promising start by guiding a cut at Harris straight to gully.

When Kevin Pietersen then fell to a looping catch over the head of short-leg after an inside-edge on to his thigh at Harris, a familiar England slide was under way.

Carberry had suggested a modicum of resistance, but fell to the second ball of the evening session, going after a short one from Johnson and edging behind.

Three deliveries later, Gary Ballance was stuck on the back foot to one that kept low to go lbw to Johnson.

Then, as at the very start of England's troubles this winter in the first Test in Brisbane, off-spinner Lyon also had his say with two wickets in an over.

Jonny Bairstow fell for a duck to a sharp catch by George Bailey at short-leg, and Michael Clarke pulled off a very good one too - diving low to his left at slip - to see off Scott Borthwick.

Stokes reacted by going on the all-out attack, dominating a stand of 44 for the eighth wicket with Stuart Broad, until he was bowled trying to slog Harris.

Broad continued to give Lyon a late bruising until Harris spoiled his fun by bowling him leg-stump, as he aimed another heave, and the seamer completed his five-wicket haul - and the series - when former Ireland bowler Boyd Rankin edged high to Australia captain Clarke at second slip.

Rogers began the day by taking the respective series century count to an astonishing 10-1 in Australia's favour when he cut part-time off-spinner Pietersen for his 14th four.

Bailey fell four short of a second Test half-century, in a stand of 109 with Rogers.

But his departure, caught at deep square-leg off Broad, merely gave Brad Haddin an opportunity to try to pass 50 for the seventh time in the series.

The wicketkeeper-batsman soon made it clear he was in a hurry to do so as well.

His eyes lit up a little too much, however, when he spotted a Borthwick full toss, and under-edged the slog-sweep to be bowled off-stump and fall seven runs short of a 500 series aggregate.

Johnson was then bowled round his legs, trying to manufacture another scoring opportunity off Stokes, and after lunch Rogers chipped a catch back to Borthwick (three for 33) to go for a career-best 119.

The young leg-spinner also had Harris caught at deep midwicket, and finally Rankin got his maiden Test wicket when Peter Siddle attempted to hook a bouncer but was caught-behind to be last out.

It amounted to minor consolation for the giant Ulsterman, after a nightmare debut to that point, but there was to be no hint of redemption for his new team. 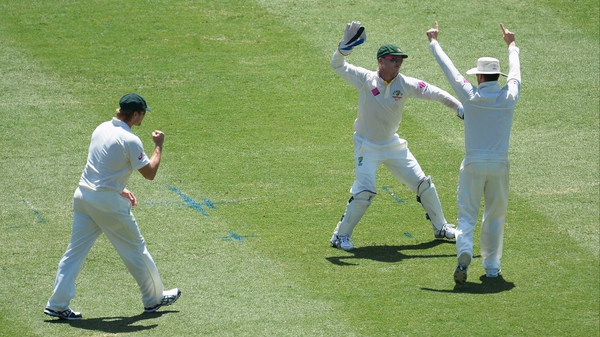 England on brink of Ashes whitewash