England appeared to be heading towards an Ashes whitewash after another hapless batting display as they closed day two of the final Test 311 runs behind at the SCG.

The tourists subsided to 155 all out by tea, and then Chris Rogers (73no) guided Australia to 140 for four at stumps to keep the onus on England to buck all the trends of their hugely unsuccessful tour to avoid defeat number five here.

Only Ben Stokes provided an oasis of effective batting in an England innings which yet again fell well short of requirements.

They lost four wickets for 15 to stumble to 23 for five - and hard as Stokes battled, in stands of 39 with debutant Gary Ballance and 49 with Jonny Bairstow, it seemed England's miserable campaign was accelerating towards an apt conclusion.

Ryan Harris (three for 36) kickstarted their problems on a glorious morning; Mitchell Johnson (three for 33) again undermined the opposition, and Peter Siddle (three for 23) chipped in too.

James Anderson also took a liking to a pitch offering the bowlers plenty, taking the wickets of David Warner and Shane Watson, but Rogers ensured Australia did not let their yawning advantage slip.

Passing 50 for the eighth time in 10 Ashes Tests over the past six months, the admirable opener was the cornerstone which prevented a significant wobble.

Harris had earlier made the most of conventional new-ball swing to see off Alastair Cook almost immediately on a glorious morning, very nearly Ian Bell next ball, and then Kevin Pietersen for good measure.

Cook fell to the second delivery of the day, a stock inswinger which he misread and left alone to be lbw.

It was a basic misjudgment, and one which perhaps summed up England's frazzled state here.

Bell ought to have followed his captain straight back.

He edged a perfectly-pitched Harris outswinger to slip, where Shane Watson put down a regulation catch which would have condemned Bell to a second golden duck in successive innings.

Nightwatchman Anderson tried to grit it out against Johnson, and took a painful blow to each hand for his trouble before guiding a catch to second slip.

Pietersen never convinced before aiming an ambitious drive at another Harris outswinger, and edging to a safe Watson this time.

Ballance opened his Test account with a drive through vacant mid off for three off Harris - and after more than 40 minutes and 20 balls stuck on nought, Bell also got under way in the same over with two runs into the leg-side.

If that amounted to partial respite, it did not last.

Siddle replaced Johnson at the Randwick End, and Bell edged him behind to become the fifth batsman to go without threatening double-figures.

Stokes hit the first four of the innings, an off drive off Harris.

Ballance had dodged Johnson's first spell, but had to face the music in his second - and for his trouble, was soon hit flush on the helmet by a short ball.

Between them, though, the two left-handers at least made it to lunch.

Ballance did not last much longer, edging behind in forward defence when Nathan Lyon found turn and bounce.

Bairstow did well to withstand the returning Johnson as he and Stokes dug in to reach three figures, before Siddle intervened with the wicket of each in the same over.

Bairstow took no apparent account of a fielder posted at short, straight mid on and duly chipped a catch to him as he drove on the up; then Stokes' amdirable efforts ended in anti-climax when he left a Siddle delivery which held its line and hit off-stump.

Stuart Broad and finally Boyd Rankin had enough in reserve, though, to pass the follow-on mark in a spirited last-wicket stand of 30 until Johnson returned to york the big Ulsterman.

After tea, Anderson had Warner lbw on the back foot from round the wicket and then Watson caught-behind by a diving Bairstow.

Broad also struck a big blow when, having discomforted Michael Clarke with one short ball, his next had the Australia captain following a little width to be caught by Bairstow.

But with every wicket, or delivery which behaved unexpectedly, the task facing England - to chase a target well in excess of 300 on an awkward surface - looked just that little more improbable. 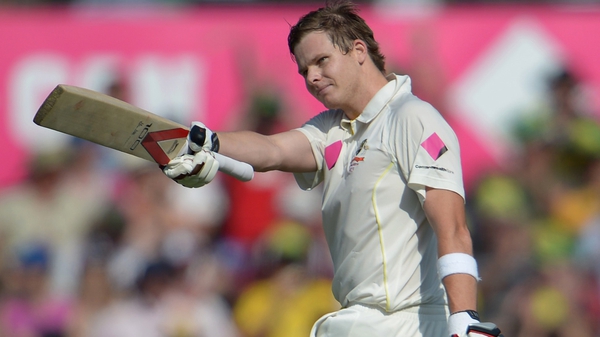