Mitchell Johnson is vowing to continue his intimidation of England batsmen, and appears amused by the tourists' plans to fight fire with fire.

England have been powerless to resist Johnson for much of the first two Tests, suffering hapless collapses against the left-arm quick both in Brisbane and Adelaide on the way to landslide defeats.

So it is they must redouble efforts at the WACA, home of the world's fastest playing surfaces and a venue likely to play into Johnson's hands.

England wicketkeeper Matt Prior, an instinctive counter-attacker, suggested today that there will be no more timidity in the way he and his team-mates bat against Johnson.

The 'demon bowler' himself, however, merely raised an eyebrow and suppressed a smile when England's new tactics were revealed to him.

"'Get after you' - if that's the way they think they can score, then go ahead," he said.

"It's a different wicket to what it was in Adelaide. It was pretty flat and pretty slow towards the end, and balls weren't really getting up.

"It's a lot easier to get a short ball here - which I'm not going to be afraid of using."

Johnson will not shy away either from the occasional verbal bouncer, to complement his line of attack, if he thinks it might help discomfort his prey.

"That's fast bowling, isn't it?" he said. "Throughout history, it's all about intimidating.

"If you can bowl a ball at someone's grille, I don't care who you are you're going to feel intimidated - and especially on a wicket like Perth.

"I like the idea that being a fast bowler, you can be aggressive and intimidate."

"It's all part of the game to me. People call it sledging; I just call it mind games" - Mitchell Johnson

Australia captain Michael Clarke, like opposite number Alastair Cook, will be playing in his 100th Test on Friday.

Johnson himself is gearing up for his 54th, at the age of 32, and is full of admiration for Clarke.

"It is obviously a proud moment for him, but also for his team," he said. "It's a phenomenal effort to make 100 Tests.

"It's a lot of days out in the field and a lot of heartache that goes with it - but also a lot of happy times as well, like we're going through at the moment.

"I hope we can make it a happy time for him."

Clarke was fined almost £2,000 by the International Cricket Council for his part in an on-field spat with James Anderson in the opening Test, and both captains have since acknowledged a responsibility to keep the sledging within acceptable limits.

Yet Johnson believes Clarke got it right at the Gabba.

He said: "He's been aggressive when he needed to be, pulled it back when he's needed to.

"What happened in Brisbane ... I thought it was great what he did. He stood up for the players. That's what you want from a captain."

Johnson too knows the value of a well-aimed sledge.

He fired off several at Joe Root, in the first two Tests, and seems to have been charmed by the cherubic smile which came back at him.

But that does not mean he will be watering down his own "mind games".

"As a fast bowler I think sometimes you can go either way," he said.

"You can either be a bit lippy, or just a little smile here or there can make the batsmen think.

"Joe Root, we saw in Brisbane, he came back with a few words - and I thought I'd cracked him then."

Root hit back with an impressive 87 in a losing cause in Adelaide, however.

"It's all part of the game to me," added Johnson. "People call it sledging; I just call it mind games.

"It's a cute little smile that he's got. I didn't mind giving him a little one back as well. You're going to see plenty more of that, I'm sure.

"I don't mind if a batter does go back at me. It's about being in control. As long as I can be in control of it, then I'm happy." 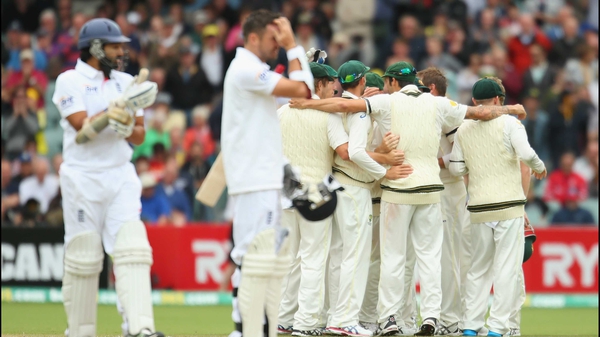