A ruthless Australia rattled through England's final four wickets on Monday to complete an emphatic 218-run victory in the second Ashes test and push the tourists to the brink of a humiliating series defeat.

The crushing win at Adelaide Oval puts Australia 2-0 ahead in the five-test series, a stunning turnaround from the 3-0 Ashes defeat they suffered in England in August.

The hosts will fancy their chances of securing the famous urn in Perth, where England have not won since 1978 and where man-of-the-match Mitchell Johnson looms as an even greater threat on the WACA's bouncy wicket.

"It's not a fluke that we have won the first two test matches," Australia captain Michael Clarke told reporters after his team tore through England's tail in less than an hour.

"We're finally getting the results for the hard work and commitment over a long period of time.

"(Realistically) that's our second test win in the past 12 months. There's a lot of work for us to get back to the number one position."

"We can't sit there moping around about it. It's hurting us like hell but we're the only guys who can change it" - Alastair Cook

The win proved Australia's victory in Brisbane was no flash in the pan, while confirming a seismic shift in the balance of power between the teams.

Any hopes England had that rain might save them were quickly dispelled when a shower cleared to allow play to start only 10 minutes late.

Pacemen Peter Siddle (4-57) and Ryan Harris (3-54) combined with aplomb to seal the win in less than an hour on a gloomy morning at the re-developing ground.

In reality, however, England lost the test on Saturday when their batsmen failed to stand up to another withering spell of extreme pace bowling from the resurgent Johnson.

The red-hot Queenslander took 7-40 in England's first innings of 172 and twice dismissed their talismanic captain Alastair Cook cheaply to win his second successive man-of-the-match award after his nine-wicket performance in Brisbane.

Cook's second innings dismissal, hooking Johnson to a man in the deep, was emblematic of his team's poor shot selection throughout.

He has little time to restore his team's battered self-belief before the third test gets underway on Friday.

"The only guys who can change it are the guys in the dressing room," said a shell-shocked Cook, who has gone from Australia's tormentor in the 2010-11 series to becoming merely tormented.

"No one else can change it for us. We can't sit there moping around about it. It's hurting us like hell but we're the only guys who can change it."

Having restored some pride on Sunday after managing to bat through a day under extreme duress, England resumed on 247-6, still 284 runs shy of their victory target.

Any sense of self-satisfaction would surely have been quashed, though, when Stuart Broad pulled the fifth ball of the day from Siddle straight to Nathan Lyon at deep square leg to be out for 29.

Matt Prior notched his first half-century to end a wretched run of scores, but appeared determined to get himself out by hooking at almost every short ball.

In the end he did just that, succumbing to Siddle for 69, with Harris taking a simple catch in the deep.

In between, Clarke threw the ball to Harris who dismissed Graeme Swann for six runs with his third delivery, the spinner driving at a short one moving away that he nicked straight to the Australian skipper in the slips.

Harris returned to seal the match by having Monty Panesar caught at short extra cover by Chris Rogers for a duck, and Australia embraced to a noisy ovation from the sparse fifth-day crowd.

Outplayed with bat and ball, England were also largely dismal in the field, with a rash of dropped catches during Australia's first innings costing hundreds of runs and allowing the hosts to declare a mammoth first innings total of 570-9.

As holders of the urn, England need only level the series 2-2 to retain it, but Cook was under few illusions about the scale of the task.

"A lot of people who'll be sitting in this room and outside will probably give us no chance," he said. "But if we don't believe that in our dressing room that the urn's gone, then it might as well have gone." 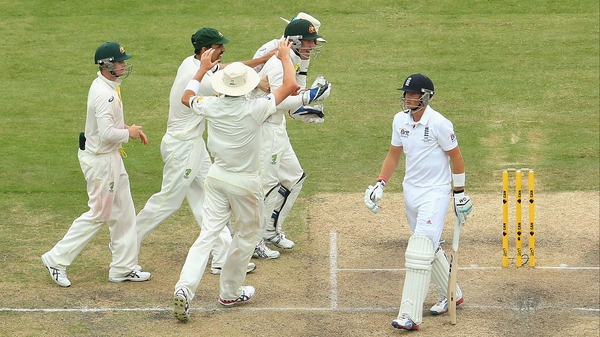 Australia push England to the wall in second test