Wrecking ball Mitchell Johnson laid further scars on England's battered psyche with a stunning seven-wicket haul that skittled the tourists for 172 and put Australia in complete control of the second Ashes test after the third day on Saturday.

The red-hot Queenslander unleashed a withering spell of pace bowling at Adelaide Oval to take three wickets in his second over after lunch, then cleaned up the tail before tea to leave England 199 runs short of avoiding the follow-on.

With the luxury of a further two days' play, Australia captain Michael Clarke sent his batsmen in to give his bowlers a rest and fired by an unbeaten 83 from opener David Warner, they pushed the lead to a mammoth 530 runs.

Australia will make England sweat in the field until close to lunch on day four, which is forecast to be a sweltering 32 degrees Celsius, before their bowlers push for the win on a pitch showing ample turn and reverse swing.

"We want to get them back out there in the field and keep cooking them a bit," Johnson said.

"It's probably going to be a day five wicket out there tomorrow. You could see the amount of spin the two spinners out there were getting and that variable bounce has definitely come in and they got the ball to reverse really early, so it's good signs for us."

"In that dressing room, there's going to be no excuses. It's just not good enough" - Ian Bell

No team has ever made more than 418 in a fourth innings chase, and England, improbably, are staring at a 2-0 deficit in the five-test series ahead of a trip to Johnson's favourite hunting ground in Perth where England have not won since 1978.

Only months after returning home from England in ignominy after a third straight Ashes defeat, Australia's turnaround has been little short of astonishing, and the principal architect has been the man selectors snubbed for the northern series.

Following nine wickets and a man-of-the-match performance to rout England in the series-opener in Brisbane, Johnson's 7-40 was the best Ashes haul in over 100 years at Adelaide Oval and featured two hat-trick chances that ultimately went begging.

Needing 371 to avoid the follow-on, England staggered to  116-4 at lunch, then walked into a fire storm after the break as Johnson kicked off one of the great spells of Ashes bowling by removing test debutant Ben Stokes leg before wicket for one, confirmed on review after initially given not out.

Four balls later, Johnson had Matt Prior caught behind by fellow wicketkeeper Brad Haddin for a duck to continue his miserable series then sent the crowd of 36,000 into delirium when he bowled Stuart Broad with the next ball.

Graeme Swann fended away the hat-trick ball, but the fired-up Johnson later took the spinner's wicket when he slashed an edge to the slips where Clarke clinched a brilliant catch.

Playing a lone hand for England, Ian Bell survived the hat-trick ball and a review for lbw to raise his half-century with an elegant cut through point for four, and number 11 batsman Monty Panesar showed courage under fire to help his partner add 37 for the 10th wicket.

Johnson eventually bowled Panesar for two to bring an early tea and leave Bell stranded on 72 and England reeling.

Clarke was bowled by Panesar for 22 with a delivery that turned sharply and would give plenty of encouragement to Australia's spinner Nathan Lyon. Steven Smith (23 not out) added another 67 with Warner before stumps.

England have not surpassed 179 runs in an innings in the series and Bell could barely conceal his displeasure with his team mates.

"Obviously it's another disappointing performance, really," he told reporters through gritted teeth. "You can't afford in test matches, certainly the first innings you have, to get bowled out for under 200 if you're going to win anything.

"In that dressing room, there's going to be no excuses. It's just not good enough.

"We need to make sure we put that right, and we'll have an opportunity second innings to at least show people we're going to show some fight." 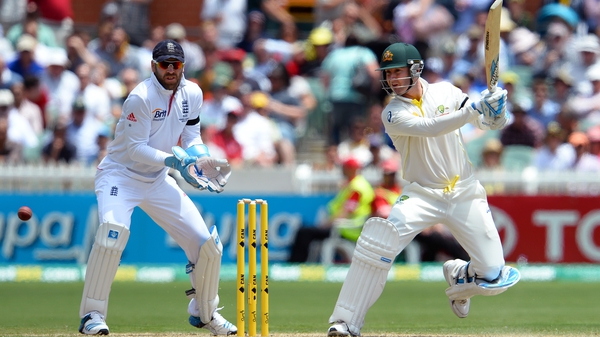