Michael Clarke's seventh Ashes hundred, in a double-century stand with Brad Haddin, piled the pressure on England to save the second Test at Adelaide.

Clarke (148), already averaging more than 100 runs per innings in Tests here, batted wonderfully after some early fortune as he and Haddin (118) powered Australia to 570 for nine declared on day two.

Clarke's opposite number Alastair Cook then had no answer to the extreme pace of Mitchell Johnson, losing his off-stump to a 92mph thunderbolt, to immediately undermine England's reply.

It was to the credit of Michael Carberry and new number three Joe Root, however, that they managed to reach stumps without further loss on 35 – albeit after a run-out scare for the former, survived from the penultimate ball of the day when there was no direct hit following a call for a faulty single to cover, and then finally a Johnson lbw appeal turned down but which would have been out on review.

The tourists did not help themselves with some more sleepy and costly work in the field in Clarke and Haddin's ground record sixth-wicket stand against any Test opposition of exactly 200.

Nothing went right for England, in fact, after Carberry had dropped Haddin on just five the previous evening – one of four clear-cut chances which went begging in Australia's innings.

Even when it seemed Ben Stokes had broken the partnership at 111, Haddin caught-behind pushing forward, instead Marais Erasmus checked for a no-ball which was confirmed by video replay.

After Haddin therefore retraced his steps to the middle, there was an ugly reprise of the antagonism which marred the first Test in Brisbane, as batsman and bowler engaged in a verbal confrontation at the end of the over and had to be spoken to by Erasmus.

Clarke was unfazed, and duly reached his second hundred of the series in Stokes' next over – his 26th in Tests.

He was not done yet either, batting well into the afternoon, until he did become Stokes' first Test victim - chipping the first delivery of a new spell to midwicket off a leading edge to end an exemplary, near six-hour innings having hit 17 fours from 245 balls.

There was to be no revenge for Stokes against Haddin, though, the wicketkeeper-batsman instead completing his hundred off the debutant with a fierce pull for his 11th four to add to four sixes.

England had resumed on a cloudy morning hoping they would not pay a high price for the catches dropped the previous evening.

Clarke, of course, had the opposite agenda – and it was he who prevailed as Australia, already 1-0 up in this series, piled on England's misery.

The Australia captain was out to impose himself from the outset against Monty Panesar, and immediately squirted two runs just over and wide of cover to complete his 50.

Clarke might easily have gone without addition to his overnight score, after failing to get to the pitch and chancing his arm nonetheless - but thereafter he was masterful.

Haddin's first runs of the day took him to 1,000 against England, on his way to the fifth half-century of the innings.

Yet quicker reactions in the field might twice have helped see him off on 18 and then 30.

Carberry was unable to deliver the right throw for a possible run-out after a quick single to short third-man; then Panesar could not make enough ground to take the catch after a faulty hook at James Anderson.

Clarke had one dicey moment, on 91, when Ian Bell was unable to cling on to an especially tough chance at short-leg as the batsman advanced to Graeme Swann and got a thick inside-edge.

For good measure, Clarke also managed to regain his ground before the ball could be ferried back to the stumps by Ian Bell and wicketkeeper Matt Prior.

England's suffering was not yet complete - and even after Clarke was gone, Haddin kept sweeping the spinners to shreds and carving the pace too.

Number 10 Ryan Harris (55 not out) then weighed in too with a near run-a-ball 50, the sixth of an Australia innings containing an Ashes record 11 sixes, as almost another 100 was added for the eighth and nine wickets before Clarke called time.

He had left 21 overs in which Johnson and Harris could make inroads.

In the end, though, only Cook was to succumb - late in defence as Johnson seared past 90mph with almost every delivery in a fearsome four-over spell with the new ball 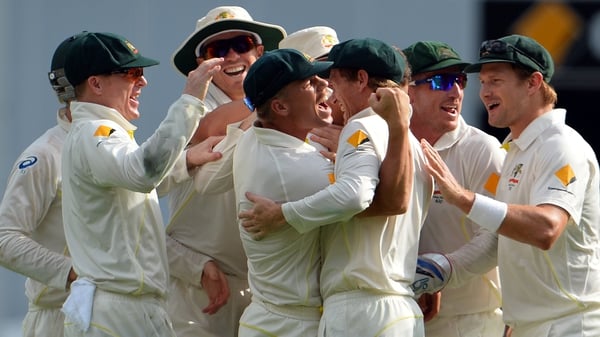