England slipped to a dismal 381-run defeat to Australia in Brisbane as the hosts struck a powerful psychological blow early in the Ashes series.

Captain Alastair Cook's defiance extended to almost four and a half hours but it was nowhere near enough to redress a dramatic imbalance in this match which opened up when the tourists lost six first-innings wickets for nine runs as they failed to cope with the pace of Mitchell Johnson.

Cook (65) did his best to narrow the margin. But in pursuit of a notional world-record 561 to win, England could not stop their hosts converting their obvious supremacy into a landslide victory with more than a day to spare as another rush of four wickets for nine runs took hold on the fourth evening.

Johnson (five for 42) was again part of the rampage in England's 179 all out, and he took nine wickets in a match which he finished himself – with a simple caught-and-bowled – to end some late aggravation between the close fielders and last man James Anderson.

England captain Alastair Cook admitted his side are going to have to work on getting to grips with Mitchell Johnson in the rest of the Ashes series.

The Australian left-armer finished the 381-run win with nine wickets as players at both ends of England's order struggled to deal with his pace and bounce.

The tourists were dismissed for 136 and 179 in their two innings and Cook knows that must improve if they are to have any chance of retaining the urn.

"Obviously he's bowled very well and put us under some pressure which is something that we need to work on as a side going into the Adelaide game," said Cook.

"We've faced a lot of him in the past and been successful as well.

"Credit to Australia. They put us under pressure in there and we couldn't respond" - Alastair Cook

Johnson, who became a figure of fun for England supporters in the last two series, also contributed with the bat as Australia recovered from 132 for six in their first innings, and Cook was left to rue letting the home side off the hook.

"Obviously it's been a tough couple of days for us," he said. "We got ourselves in a really good position there in that first innings.

"Credit to the way that (Brad) Haddin and Johnson played, they got Australia to a fairly competitive total but I thought it was still short (of par) on that wicket.

"We got off to a reasonable start with the batting and that collapse really put us behind.

"You always talk about trying to not lose wickets in clusters. You talk about it a lot of the time but sometimes that doesn't really help you to do that out in the middle.

"Credit to Australia. They put us under pressure in there and we couldn't respond."

Australia's David Warner was amongst those to question England's mentality as they lost six wickets for nine runs in the first innings but Cook is certain his team can bounce back.

"This side has got plenty of character," he said. "We've fought back in the past as well. Obviously it's going to hurt us, this game.

"But there's plenty of character in the side and we're going to show that again." 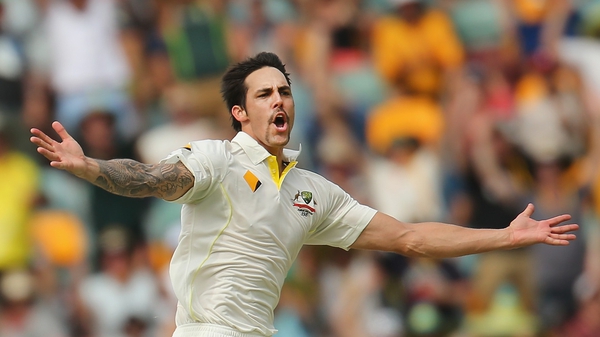