While the 'big three' of Galway, Kilkenny and Cork dominate in camogie, the Rebels are hoping some small tweaks can lead to a return of the O’Duffy Cup on Leeside this year.

Since Wexford’s All-Ireland success in 2012, each final has been contested by two of the aforementioned counties.

Cork lead the way on four – Galway have three titles, one more than Kilkenny – but are without a win since 2018, losing to the Tribeswomen last year and not being involved in the previous two deciders.

The league shows a similar story, with Clare in 2014 the last side to upset the status quo with a final appearance before suffering a heavy defeat to Kilkenny.

Cork are without league success in that period, but looked well placed to change that last month against the Tribes.

When Amy O’Connor slammed in a close-range goal to crown a superb attacking move at the start of the second half, the Rebels were 1-10 to 0-07 in front and it looked like their extra variety and range in the attacking sector was set to carry them to victory.

.@CorkCamogie have scored the first goal of the @OfficialCamogie League final right at the start of the second half via Amy O'Connor to extend their lead #rtegaa @RTE2 @RTEplayer

Galway however found an extra gear to reel off a fifth successive win over Cork in league and championship outings.

Goalkeeper Amy Lee, who took over as captain for the 2022 season, admitted that they learned a lot from that disappointing defeat.

"Galway kicked on, we didn’t seem to have any bite in us," she said at launch of the 2022 Glen Dimplex All-Ireland Camogie Championships.

"Maybe we were guilty of not changing it up even more."

Ill-discipline on occasions and not getting any return from their straight line puckouts left food for thought, while there was an acknowledgement of the calibre of players Galway called upon from the bench, with the likes of Carrie Dolan and Catherine Finnerty contributing 2-04 upon their respective introductions.

"Galway have really built their bench over the last few years," she said.

The positives are that they are there or thereabouts, Orla Cronin is working her way back to fitness and some of the more callow players are making their presence felt.

In the league final defeat to Galway, wing-backs Saoirse McCarthy and Laura Hayes were in sublime form, scoring 0-4 between them in all-action displays.

"That was a great game to get under their belts," Lee says. "Now they know they can play with a small bit of freedom. They really came out of themselves in that game.

"They are our next generation and leaders."

The Na Piarsaigh player has had to be patient since joining the senior panel in 2015.

For 18 seasons Aoife Murray was the number one, but after hanging up her hurl for Cork, Lee has been between the sticks since 2020, working closely with goalkeeping coach Teddy O’Donovan, and more recently Davy Fitzgerald.

Fitzgerald - pictured below - joined Matthew Twomey’s backroom team last year and while he’s not overseeing the goalkeeper’s specifically, his experience has been used by the players involved. 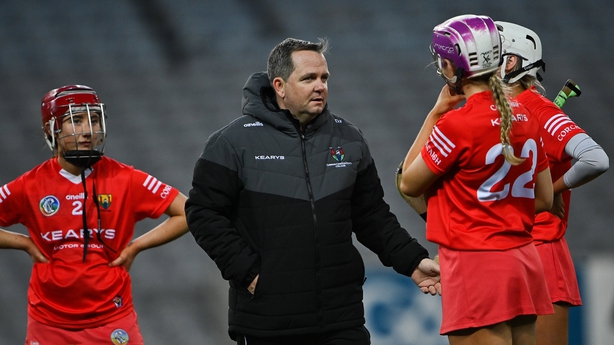 "He’s great. He’d come down and say, ‘would you consider doing this? It’s great to have, keeps you thinking all the time."

The long-serving Paudie Murray has departed, but the foundations will serve a Cork team well looking to wrestle silverware back from the Tribes.

The championship begins on the weekend of 21/22 May, with Cork taking on Wexford first up in Group 1, with Galway and Kilkenny battling it out in Group 2.

Lee thinks the Yellowbellies and Clare have the potential to close the gap to the big three, but one teams seems to be closer than the rest in trying to break the stranglehold of Cork, Kilkenny and Galway.

"Tipperary are on the way, and are very close. They gave Galway a good game against All-Ireland semi last year."