Anthony Joshua is determined to write a new chapter in the story of the "comeback king" by reclaiming his WBA, IBF and WBO heavyweight titles from Oleksandr Usyk.

The rivals clash in Jeddah on 20 August in a rematch being dubbed 'The Rage on the Red Sea' and they began promotional duties in the Saudi Arabian coastal city on Tuesday afternoon.

Neither fighter wanted to pull away from an intense face off at the end of the press conference despite instructions from promoter Eddie Hearn. It was Usyk who eventually moved first, although his eyes were still fixed on Joshua as he did so.

The Ukrainian technician secured a conclusive points victory when they met for the first time at Tottenham Hotspur Stadium last September, but Joshua feels he has the tools to become a three-time unified heavyweight champion.

Strengthening his belief is that he has successfully emerged from his wayward years as a teenager when he was arrested by police and spent time on remand in prison, as well as battling back from his shock defeat to Andy Ruiz Jr in 2019.

"The great thing is that I have a second chance. When I was a youngster I got into a little bit of trouble now and again and I was blessed with a second chance and I found boxing and I took it with both hands," Joshua said.

"If you know me and a lot of my story, you’ll know I’m the comeback king. You can put me down but it would be difficult to keep me down because I always keep my spirits high.

"I’m very prayerful and thankful. Even through my tough times I know that everything will make sense in the long run. So we keep moving forward.

"Definitely the hunger is still there, as I’ve always said from the get go. Stay hungry, keep the motivation high.

"Blips happen, things happen in life, but resilience, mental toughness and consistency will always prevail. So we’re still on the road to undisputed for sure.

Joshua’s game plan for the first fight was criticised as he attempted to outbox a smaller and more technical fighter rather than capitalise on his size and power advantages.

Long-term trainer Rob McCracken was subsequently moved on and in the 32-year-old’s corner next month will be Robert Garcia, who has promised revised tactics.

"I think he fought the wrong fight. He’s the bigger man, the stronger man, he’s got the reach advantage, so we’re going to take advantage of all that."

The rematch was scheduled to take place earlier this year, but Usyk returned to Ukraine to help with the war effort against Russia until he was given special dispensation to prepare for a second fight against Joshua.

"As we all know, we are not in the best conditions back at home at the moment, but we are doing what we have to do," Usyk said.

"We are doing our job, together with my team we are working hard to achieve our goals. I never made loud and bright speeches, all I need to do is work hard in my training camp and gym.

"That’s what I will do until the day of the fight. And then I will enter the ring and will make you happy with my boxing."

It will be Joshua’s second fight in Saudi Arabia after he avenged his defeat to Ruiz with a comfortable points win in Riyadh in 2019. 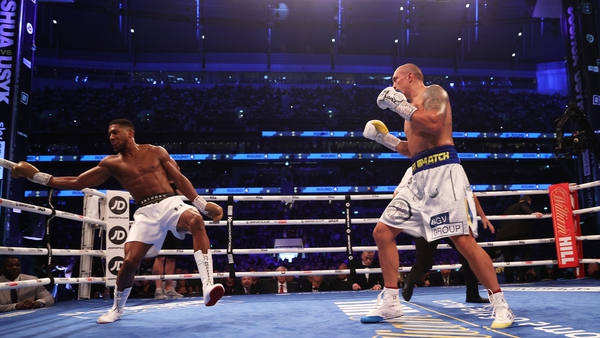