The first women's boxing match to headline at Madison Square Garden did not disappoint as Katie Taylor and Amanda Serrano served up a contender for fight of the year. This is how the international media appraised the fight.

"The entire promotion - on posters, as part of the title card and even as the hashtag they tried to push the past few weeks - had all been focused on one thing: history. The first women to ever headline The Garden's big room. Taylor and Serrano were asked to do next to impossible Saturday night.

"They were asked to live up to the outsize reality that is promoting any sport, but especially boxing. This could have easily been a letdown. These events can get swallowed by the gravity of the promotion and the intensity of the moment.

"Taylor-Serrano exceeded what people might have expected, what the promoters had billed. As Taylor and Serrano stood in the middle of the ring in the final minute, decibels from the crowd rising with each punch thrown, everything they hoped for was reality.

"Serrano had a bruised face; Taylor a bloodied nose and a cut over her right eye. The crowd provided an intense atmosphere. All of the necessary ingredients were in place to create a big moment in The Garden.

"If you wanted a scrap, Taylor and Serrano delivered. If you wanted a technical fight between two different styles of fighters trying to game-plan how to attack one another? You got that too.

"The only thing that didn't happen was a knockdown or a knockout, but some of the best fights don't end like that. Why? Because the fight was even. Two fighters of equal stature, making life difficult for the other one."

"Serrano, who fought with fire and ferocity, won the fight 96-94 on the first judge's scorecard. The narrow margin seemed much more accurate than the assessment of the two officials who ruled in favour of Taylor by scores of 96-93 and an unacceptably wide 97-93. A draw seemed the right result to many at ringside because this was a fight that transcended the sustained hype and serious expectation which had defined the build-up. It was an exhilarating but brutal battle which left both women cut and bleeding and forced to call upon incredible reserves of courage and desire."

"Katie Taylor did it like she usually does - with grit. She was rocked and in trouble more than a few times Saturday night before a sellout crowd of 19,187 at Madison Square Garden in the much-anticipated women's lightweight war with Amanda Serrano.

"In the end, Taylor’s extra grit, mixed in with some strategic smarts, won out.

"Taylor (21-0, 6 knockouts) remained The Ring/WBC/WBO/IBF/WBA undisputed lightweight world champion with a 10-round split-decision victory over the stubborn, courageous Serrano (42-2-1, 30 KOs).

"Basically, it was bombs away."

"The clash was the first to star two women at the Garden. And these two great ladies, they showed that they are at the top in professional boxing.

"It was a solid contest dominated mostly by Serrano, who after a great sixth round, seemed to lose some gas, giving space to a Taylor who was even flirting several times with touching the canvas.

"Taylor survived shrapnel and pressure from the Puerto Rican, and looked for a second breath, and convinced two of the judges of the fight.

"However, the good taste left by the contest was such that it is very possible that Serrano and Taylor experienced the first of a possible trilogy."

"The tension was almost indescribable as both teams stood in the centre of the ring waiting to hear the results. Taylor was lucky to keep her titles three years ago and it was a nervous wait again under the bright lights of MSG.

"Taylor edged it in a fight that was in truth very close, and Serrano's apparent lead might have slipped away in the moments she slowed down.

"Opinions will be split on who won the fight and the debate will likely rage on until the two champions step in the ring again." 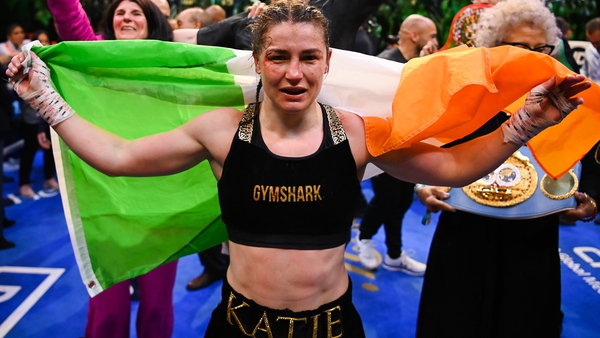