Katie Taylor will put her undisputed world lightweight title on the line against Amanda Serrano in a blockbuster battle at Madison Square Garden on Saturday 30 April.

The long-mooted contest, which was confirmed on Thursday afternoon, will be the first time two female fighters will headline a card at the famous New York arena.

Taylor (20-0 6 KOs) will put her WBC, WBA, IBO and IBF belts on the line for the sixth time since her win against Delfine Persoon in June 2019. Taylor saw off Persoon in a rematch in August 2020, and then overcame the challenges of Miriam Gutierrez, Natasha Jonas, Jennifer Han and Firuza Sharipova.

"This is a fight I've wanted for a long, long time and I'm just excited for it to finally take place because these are the kind of fights I'm in the sport for," said Taylor.

"People have been talking about this fight for years and there have been times I wondered if it was ever going to happen so I'm very grateful to Eddie Hearn, everyone at Matchroom, DAZN and Madison Square Garden for getting it over the line.

"When I turned professional my goal was to be involved in huge events like this so to headline at Madison Square Garden in a fight of this magnitude is really the pinnacle of the sport. It's such an iconic venue and has been home to so many of the historic moments in boxing and I truly believe this will be another one."

Serrano added: "It is a dream come true to have the opportunity to headline Madison Square Garden and do so against one of the greatest boxers of all time in Katie Taylor.

"Since I was a young girl, my only boyfriend has been boxing. I have dedicated my life to him, and this event makes that commitment worth every minute. On 30 April I am going to make history for me, for my team, for my family, for Puerto Rico, for every Latina and Latino and for all women worldwide."

The significance of the bout was underscored by tennis legend Billie Jean King, who described it as "historic".

"The Taylor vs. Serrano fight at Madison Square Garden is historic and it is only fitting it is being held in the venue that has hosted so many important championships in sports," said King.

"These two women are breaking barriers and opening doors for others by being the main event and not the undercard, fighting for one of the biggest paydays in boxing and showing everyone that if you can see it, you can be it." 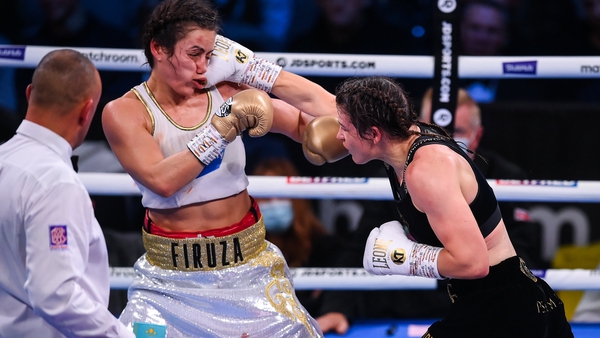 Undisputed, undefeated - Katie Taylor too good for Firuza Sharipova to retain titles and move to 20-0 as a pro