Katie Taylor remains the undisputed lightweight champion of the world after a unanimous-decision victory over Kazakhstan's Firuza Sharipova at the Echo Arena in Liverpool.

The Irishwoman moved to 20-0 as a professional and retained her WBC, WBA, WBO and IBF belts in what was her 15th world title bout.

Taylor was drawn into a scrap at times but was the faster and more accurate fighter from the outset and that was reflected in the judges' scores of 98-92, 97-92 and 96-93 in her favour.

Sharipova was game from the first bell but Taylor unloaded several combinations in the opening rounds, staggering her opponent in the second.

The Bray Bomber landed a big left hook in the third but her opponent shaded the fourth.

The fight got scrappy in the middle stanzas. Sharipova was docked a point for holding and a cut opened up on her eye but she started to enjoyed greater success with Taylor willing to fight on the inside.

Taylor (35) kept her distance in the closing rounds however, and picked her seven years younger rival off while avoiding the big punch Sharipova needed to avoid a second career defeat.

Speaking afterwards, Taylor said she was looking forward to a "historic fight" against seven-weight champion Amanda Serrano next year, which she said would be "the biggest female fight possible".

Her promoter Eddie Hearn said he expected the "the biggest fight in women's boxing history" to take place at Madison Square Garden in New York in April 2022.

The 25-year-old from Belfast moves to 10-0 as a pro and secures the WBA International Middleweight title. 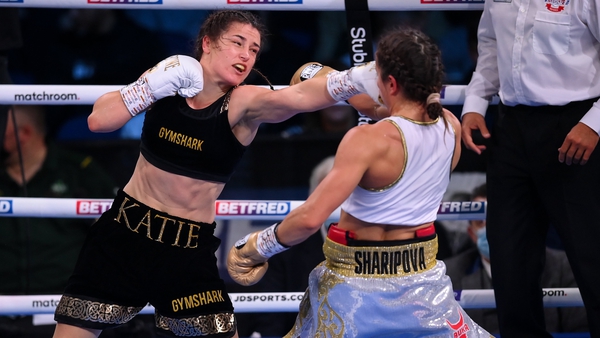