Eddie Hearn says Katie Taylor has been desperate to silence those who believed Delfine Persoon won their bout last year,  from the second the Irishwoman returned to the dressing room after the fight.

Taylor added Persoon's WBC title to her WBA, IBF and WBO crowns at Madison Square Garden in June last year after a razor-thin majority decision verdict but many at ringside and beyond felt the Belgian deserved the nod.

The Bray woman will put her status as undisputed lightweight champion on the line in a rematch against Persoon on the Dillian Whyte-Alexander Povetkin bill on 22 August, which will be part of 'Fight Camp' - a series of behind-closed-doors fights staged in Hearn's garden in Essex.

"I think ever since we walked back to the changing rooms, Katie Taylor has thought, 'I want to put that thought out of people's minds. It was a close fight, I believe I won but I will do it again and I will prove to you that I am the best'."

Hearn's garden in Brentwood has been transformed into a state-of-the-art boxing venue.

A canopy has been erected to protect the temporary ring from bad weather, while the manicured lawns and flowerbeds contribute to an unusual backdrop.

"I wanted to bring boxing back with a bang, we're a major sport and we had to make a big impression," he added.

"Everybody would prefer to fight in a packed arena but I think fighters started to realise 'I can't afford for my career to stall'.

"We hope this isn't going to be the new norm but what you are going to see on Saturday is something very different and there are going to be a lot of people tuned in to see the start of Fight Camp where, for the next four weeks, this will be the home of boxing." 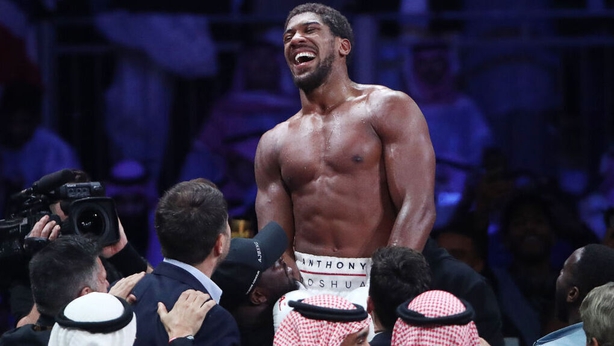 Joshua's career has effectively been put on hold by the coronavirus pandemic since he regained his WBA, IBF and WBO heavyweight titles from Andy Ruiz Jr last December in Saudi Arabia.

He expects Joshua - who has reached an agreement for two upcoming fights with fellow Briton Tyson Fury - to take on mandatory challenger Kubrat Pulev before the end of 2020 and admits the bout could also take place in similar circumstances to his current venture.

"We want him to be in front of crowds. But for his career, for his development, he needs to fight this year," Hearn said.

"His last fight was against Andy Ruiz in December, he probably won't fight until December this year, so it will be a year. And next year we know he has two big fights against Tyson Fury.

"Of course fighters want to earn as much money as possible but they also need to develop as fighters and I think the Kubrat Pulev fight is a good solid, tough fight for him and I am almost certain you will see that fight this year.

"He would fight here (at Hearn's home), no problem. But we want to be in a position really where we can drive some people back into the arena.

"If we were faced with the option of having no fans for an Anthony Joshua fight, we would still look to go ahead. He's spent a lot of time training out here on this garden so he would have no problem fighting here himself.

"He was here a couple of weeks ago. He loves to fight, to box and it's not just about fighting in a huge arena - Wembley Stadium, Madison Square Garden - it's about boxing.

"He wants to improve as a fighter and he will do it anywhere, any time."

There will also be events on 7 and 14 August, before former WBC interim heavyweight champion Whyte rounds things off by going up against big-hitting Russian Povetkin.