Katie Taylor made history by unifying all four world lightweight titles with a hard-fought, narrow victory over Delfine Persoon at Madison Square Garden in New York.

She added Persoon's WBC title, and the Ring Magazine strap, to those she already possessed from the IBF, WBA and WBO, having risked being stopped in the 10th and final round, after being awarded victory via scores of 95-95, 96-94 and 96-94 from the three ringside judges.

Persoon left the ring in anger after the Bray woman's hand was raised at the end of a ferocious battle, which saw the Belgian policewoman undoubtedly end the fight in the ascendancy.

Many ringside, including Sky co-commentator Paulie Malignaggi, Carl Frampton, Carl Froch and the DAZN commentary team had the awkward and gritty Persoon winning the fight.

However, it was the 2012 Olympic gold medallist who prevailed, chalking up the 14th straight victory in her professional career. Her next step may be a rematch with Persoon, who undoubtedly provided the greatest test of the 32-year-old's time in the paid ranks.

Taylor started well and used her customary hand speed to connect with the experienced Persoon, who was more than willing to come forward and trade leather with the Wicklow native.

By the third round however the awkward Persoon was taking control of the ring for long periods of the two-minute round. A shoulder from Persoon and a shot after the bell were attempts to ruffle Taylor but it was the Belgian who has a cut under her eye.

She would develop another large bump over her left eye, while Taylor suffered a cut to her head after one of many head clashes throughout a scruffy fight with lots of clinches.

Taylor, the more accomplished boxer, found herself getting drawn into a scrap in the fifth round - resorting to Ali-style rope-a-dope and gesturing towards the game Persoon to keep coming.

It won the crowd's affection but arguably should have lost her the round, which she in fact won on two of the three judges' scorecards.

All three judges gave Persoon at least two of the last four rounds, as the WBC champion began to look stronger against a visibly tiring Taylor.

The ninth round may have been the crucial one as Taylor rocked Persoon early in the round with some great jabs.

She survived a 10th round barrage from the Belgian and collected the WBC and Ring Magazine belts to go with her WBA, WBO and IBF straps. However all five could be up for grabs again soon if Persoon looks for a rematch. 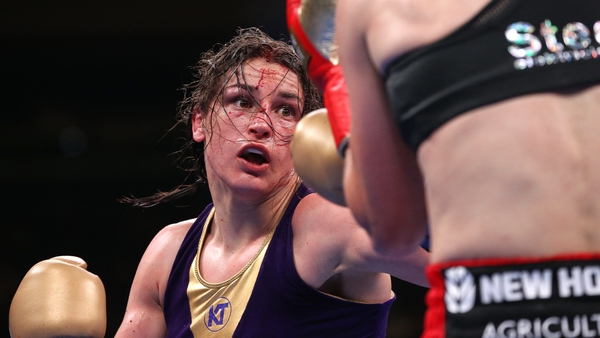