Gary ‘Spike’ O’Sullivan is primed for the biggest fight of his career on Saturday night in Las Vegas when he takes on former world champion David Lemieux.

The Cork middleweight finds himself on the undercard of the most anticipated boxing match in years as pound-for-pound king Gennady Golovkin fights Mexican superstar Canelo Alvarez.

The long-awaited rematch takes place at the T-Mobile Arena on Saturday night with the WBA, WBC and IBO world titles all up for grabs, as well as the lineal middleweight title and the coveted 'The Ring' title.

Should O’Sullivan get past his Canadian opponent, the Cork native is set to fight for all that world title glory in his next encounter.

O’Sullivan has won his last six fights, since he lost to Chris Eubank Jnr in a WBA world title eliminator back in 2015, and the charismatic Corkonian has since made a name for himself in America, most notably beating the highly-rated Antoine Douglas, stopping the American prospect in the seventh round last December.

The 34-year-old’s only other defeat came way back in 2013 to reigning WBO world champion Billy Joe Saunders on points, and O’Sullivan can take heart from his two losses in the knowledge that he has certainly faced better boxers than Lemieux – Saunders easily defended his belt against Lemieux, making the Canadian look one-dimensional in a facile victory.

But Saturday’s encounter will see two similar fighters slugging it out for a shot at the world title, and O’Sullivan believes that it will be a great spectacle for the fans.

"Stylistically, he is similar to myself and he is a former world champion," said O’Sullivan, speaking to RTÉ Sport's Darren Frehill.

"I think it is going to make a really good fight for the fans, and the fans are excited about this fight." 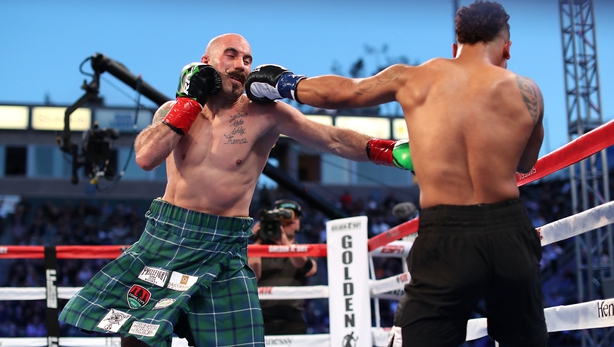 The world will be watching on Saturday night – or the early hours of Sunday morning here in Ireland – and O’Sullivan admitted that he is very excited to be part of the biggest show of the year.

"I fought on some big bills before, on the undercard of Anthony Joshua in London but I believe this is the biggest of all.

"It is the biggest fight in boxing in the world, Canelo versus GGG at the T-Mobile, the biggest arena in Las Vegas.

"I’m excited more than feeling pressure. I’m excited to be a part of this event and I plan to shine under the lights of Las Vegas.

"It doesn’t get any bigger than this. I can’t wait for it."

"I'm going to retire you after I knock you out on #Sept15" @spike_osullivan on his big fight against @lemieuxboxing #CaneloGGG2 👊🏽💥👀 pic.twitter.com/T0E44d6PdL

Fighting out of the Celtic Warrior Gym in Dublin under the tutelage of Paschal Collins, O’Sullivan is in the shape of his life and the Mahon man believes he has been getting consistently better over the past few years.

Saturday’s fight with Lemieux not only acts as a world title eliminator, but also has the potential to set O’Sullivan up financially for the rest of his life and the former Irish champion knows exactly what is at stake for himself and his family.

"The winner of myself and Lemieux is going to go on and fight the winner of the main event so there is a lot at stake. It sets up my family’s future if I win this fight. It is absolutely massive.

"I’m ranked number three middleweight in the world now and to be ranked above David Lemieux, the former world champion, is a fantastic position for me to be in.

"This is a WBC world title eliminator as well. The winner of Canelo v Golovkin will hold that belt and I fully expect to fight the winner."