TJ Doheny made his world title intentions crystal clear on Saturday night in Boston with a comprehensive second-round knock-out against Mike Oliver.

Fighting on the Murphys Boxing St Patrick’s Day card at the House of Blues, which also included an acoustic set by world renowned Celtic punk outfit the Dropkick Murphys, Doheny proved too powerful for his 38-year-old opponent and stopped Oliver in the second round.

The scheduled eight-round bout was a stay-busy fight for Doheny who is the mandatory challenger for the IBF super-bantamweight world title and is set to fight champion Ryosuke Iwasa during the summer.

Doheny made light of his opponent on Saturday night to maintain his 100 per cent record in the professional ranks, moving to 19-0, with 14 of those wins coming via knock-out, and now sets his sights on securing the world title against the Japanese belt holder.

The Portlaoise man will probably have to travel to Japan for the fight, however, the much-travelled Doheny is willing to go anywhere to fulfil his world title ambitions.

"If I’m the away fighter, I feel like the pressure is off because it’s not my crowd, I’ve just got to get in there and perform." 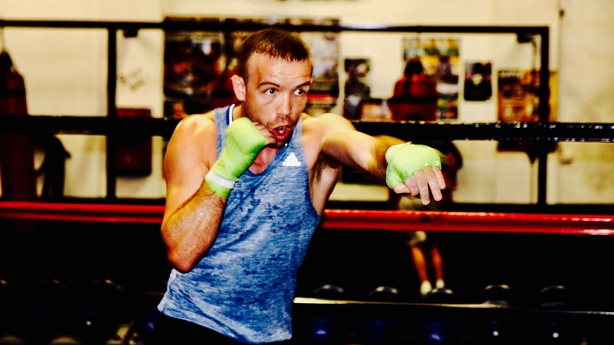 Doheny secured the mandatory position in the IBF rankings as a result of his dominating victory in the world title eliminator over Mike Tawatchai [aka Pipat Chaiporn] in Bangkok last December.

‘The Power’ easily outpointed the hometown fighter, yet the result was given as a split decision, which Doheny put down to the hometown crowd and a referee that did him no favours in the ring.

"It was such a weird experience because the referee was coaching him through the rounds and was probably telling him ‘you’re ahead, get up on your bike’. And I was chasing him around and panicking as the rounds were slipping away from me.

"It just felt like everyone was against me, the ref, the crowd...he’d swing and miss and the crowd would go crazy, which might have swayed the judges a little bit."

But Doheny came through that most difficult of challenges and believes that the experience will stand to him going into this summer’s showdown.

"After going through an experience like that, nothing is ever going to be as weird as that again, which gives you peace of mind.

"I still haven’t had a fight where I have been able to showcase my skills and I think this fight against Ryosuke Iwasa, you’ll see the best of TJ Doheny.

"I’ve sat down and analysed him. I’ve watched him almost every day on YouTube. He’s stylish, sharp and accurate with his shots. But he’s like that for the early rounds and then the holes start coming through and that’s when I’m going to capitalise on his flaws.

"So once I start putting some shots on him, the whole fight with turn and I will get him down the stretch.

"He’s been down on the deck twice and both by southpaws, which is another confidence builder. I know I have the tools to beat him so once I go out and perform to the best of my ability, there is no way that I won’t be bringing that belt back to Ireland."

Fun night overall when @KenDKM puts on a show of any kind.  Donehey looks powerful, O'Connor and Claggett put on a very entertaining main event. https://t.co/MJ519GDPhN

And while Doheny is loath to look too far past the next fight, the Australia-based boxer, who completes his training camps in Boston, is allowing himself to dream about that first defence back home.

The 31-year-old would love to fight in front of his hometown fans in Portlaoise, however, he feels that a big world title fight night in Dublin would bring all his dreams to reality.

"I don’t like to look too far ahead because I have got this big fight. I want to get my hands on this IBF belt and then talk about getting my first defence back in Ireland.

"With my promoter Murphys Boxing, we’d fill a great card for a super night in Dublin.