The 28-year-old produced one of his finest performances to retain the only world middleweight title that wasn't contested by his high-profile rivals in the early hours of Sunday morning. That draw in Las Vegas means his wait to secure a lucrative unification match-up will go on for a while longer.

Saunders, who won his title against Limerick's Andy Lee in December 2015, was involved in some controversy at the weigh-in; his young son attacked Monroe, punching his father's opponent in the groin and aiming a kick at him.

When the action began in the ring though, there was little fuss from Saunders, who  never looked in trouble.

America's Monroe Jnr fought with a disappointing lack of ambition - particularly given he could have earned the same position - in dropping the unanimous decision for the third defeat of his career. 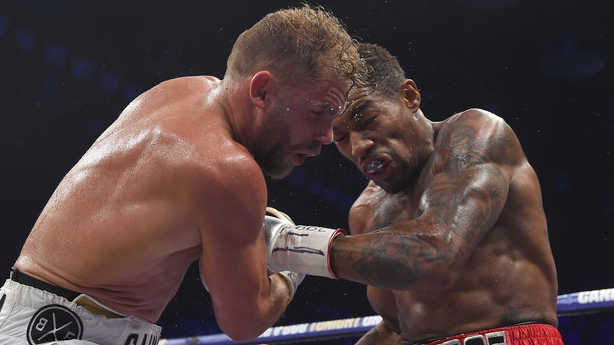 Saunders, fighting for the first time under new trainer Dominic Ingle, also improved on his unconvincing performance in December against Artur Akavov, and was rewarded with scores of 117-111, 115-114, 117-112 via the three ringside judges.

It was his superior sharpness and intent as much as his skills that secured his latest victory. Leading with the jab and also succeeding to Monroe Jnr's body, Saunders began with a typically-fast pace and faced little more than jabs in return.

In the third round an accurate right uppercut hurt his challenger, and it was only when a cut opened by the bridge of his nose following an accidental clash of heads in the fourth that the American temporarily fought with greater belief.

Even then, and perhaps after Saunders had overcome any uncertainty that arose from that brief flow of blood, the champion's dominance swiftly returned and he found a steady pace that ensured he continued to convince.

He was fighting for the first time in 10 months, following the defeat of Akavov, which itself had followed a year of inactivity, but Monroe Jnr did too little to test any ring-rust Saunders may have had. 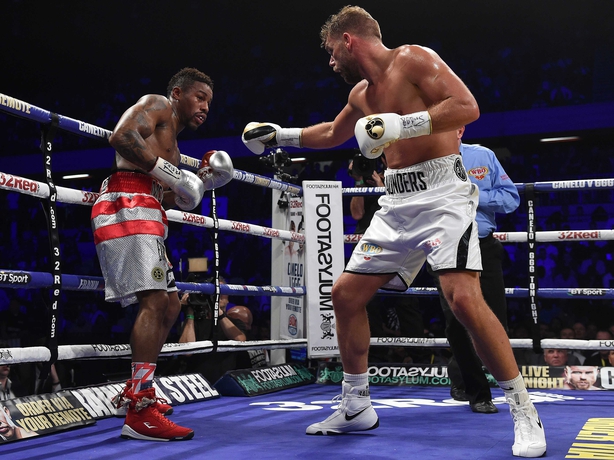 Only in the final round did he increase his intensity against a fighter who has long been known to fade behind the stretch, throwing more than what had mostly been jabs. By that point victory was clearly beyond him, however, and it was a surprise that one judge had it so close.

At Friday's weigh-in, Saunders' eight-year-old son Stevie had punched and kicked Monroe Jnr below the belt, and his father afterwards handed him the microphone, into which he said: "Sorry for kicking you in the nuts."

Promising heavyweight Daniel Dubois had earlier earned his fifth victory from five when stopping AJ Carter in only 48 seconds. Carter required oxygen and was immediately sent to hospital, having been knocked down three times.

There was also a victory for light-heavyweight Anthony Yarde, who, after repeatedly hurting Hungary's Norbert Nemesapati and knocking him down, saw his opponent withdraw at the end of the third round.