Andy Lee lost his WBO world middleweight championship in Manchester on Saturday night, coming out the wrong side of a majority decision against England’s Billy Joe Saunders.

Limerick native Lee started the bout in a cautious fashion and was surprisingly dropped to the canvas twice in the third round by fellow southpaw Saunders, who is not renowned as a big puncher.

The 31-year-old defending champion worked his way back into the bout in the later rounds, eventually claiming a draw (113-113) on judge Marcus McDonnell’s card, but that was overruled by Dave Parris (115-111) and Phil Edwards (114-112), who gave the nod to the challenger after 12 rounds.

The win extends 26-year-old Saunders undefeated career to 23-0, while Lee will be left to contemplate his future after his third career defeat having lost the world title he was so proud to finally claim one year and one week ago.

The loss sees Lee’s record slip to 34-3-1 and the Castleconnell native will now be left to assess whether he wishes to rebuild towards another title shot.

“The two knockdowns cost me the fight,” said Lee at the post-fight press conference, which he only attended for a couple of minutes, congratulating Saunders.

“He deserved to win so I can’t complain with the decision. I would like another go of it, I felt I finished stronger but the two knockdowns cost me the fight.”

Saunders suggested that he would be open to a rematch, but the fact that promoter Frank Warren and the challenger spoke extensively about other future fights and possible title unifications bouts it is not certain whether Lee will get to challenge for his old title again.

“Andy showed a good account of himself tonight, a rematch could go. I’m sure we could do a bigger venue down in London that’s something that we could talk about as well,” said Saunders. 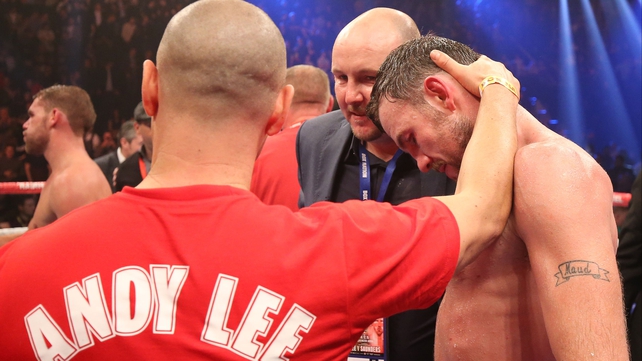 There appeared to be an attendance of somewhere between 5,000-10,000 present at the 20,000 capacity Manchester Arena, with the upper tiers and one end section closed off for the bout, and a healthy Irish crowd cheering Lee on.

In a cagey first round, Lee looked comfortable working off his jab but Saunders was slightly busier and landed a nice short right hook in the last minute of the opener.

The pair continued to fight in a cautious fashion in the second, although Lee followed up his jab with combinations and began to put his punches together nicely.

Then came the knockdowns as a massive right hook from Saunders put Lee on the canvas before the champion was put down again from a shorter right hand. Lee looked on unsteady legs but remained composed and saw out the round, with the rivals sharing a smile and some words in the champion’s corner at the bell.

The Limerick man settled in the following round, with Saunders reassuming a cautious approach, possibly wary of his opponent’s reputation for staging comebacks.

A big looping left hand from Saunders was the most eye-catching punch in the fifth and Lee’s right eye was noticeably swollen. 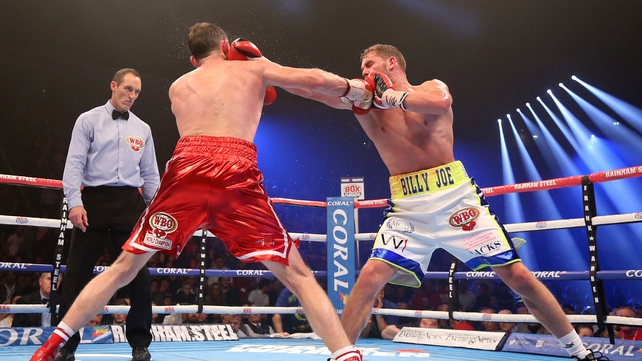 By this stage, Lee’s work-rate did not appear to be high enough to impress the judges and the champion often seemed to be attempting to focus on setting up a looping left hook which failed to land.

The seventh was another tentative affair with few punches of note landing – Lee jabbed well, while Saunders continued to remain busy.

Lee had a better eighth round, jabbing and moving forward but Saunders head movement made it difficult for the pursuing Irishman to set up further shots.

The Champion continued to look more assured in the following round and another left hand whizzed past the whiskers of Saunders, issuing another warning to the challenger that Lee was not yet spent.

Lee started the 10th in assertive fashion but that provoked Saunders to respond with his jab before the challenger was on the back foot again towards the end of the round.

A short left from Lee midway through the 11th was immediately countered with a looping left from Saunders and while the champion appeared to steal the round on work-rate, a successful comeback looked dependant on either a knockout or a couple of knockdowns.

Unfortunately for Lee, they never came despite the defending champion pursuing the challenger throughout the final round.

The defending champion made an admirable effort to come back into the fight but Lee could not turn the tide to retain his title.

Smith landed the more powerful punches in the early rounds, and while Kelly was busy he didn’t really trouble the champion.

The challenger appeared to be hurt by a body shot during the fifth round before Smith landed a lovely short right rand on Kelly’s chin just on the bell.

Kelly took further punishment in the following two rounds before falling off the ropes to the canvas under a flurry of punches from Smith in the seventh, but surprisingly referee Marcus McDonnell ruled it a slip and allowed the contest to continue before waving it off seconds later at 2mins 35secs of the round after the challenger’s corner threw in the towel. 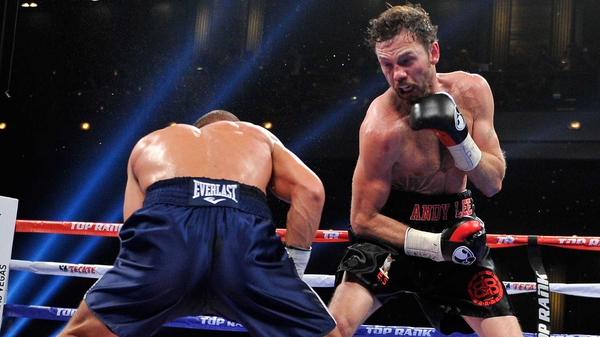