The dispute over selection for Ireland's boxing team for the European Championships was resolved on Wednesday evening, but the saga over the power structure within the Irish Athletic Boxing Association looks set to continue.

Dean Gardiner won a split decision victory over Martin Keenan in a controversial super-heavyweight box-off at the National Stadium to stamp his ticket to Ukraine next month.

Gardiner, the 2016 national champion, and current champ Keenan were thrust into battle at short notice after a dispute over the IABA's initial team selection.

Gardiner was unable to compete in the National Championships in February and Keenan went on to win the title, becoming new High Performance Director Bernard Dunne's preferred choice. 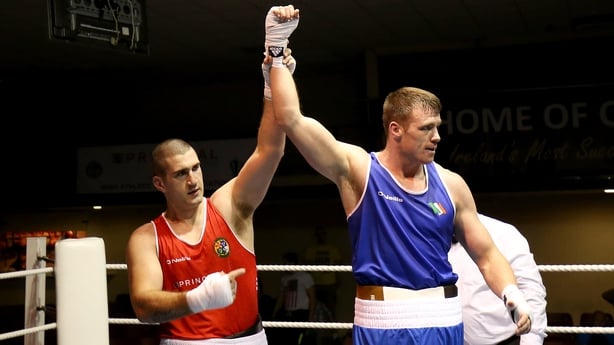 When Gardiner was then named on the team for the Europeans, Keenan's club Rathkeale in Limerick made representations to challenge the selection and so it was agreed that there would be a box-off between the two this Wednesday night.

Gardiner told RTÉ Sport he had put the issues surrounding the box-off out of his mind, saying: "All of that stuff is nothing to do with me. I just had to be prepared to box.

The row has exposed serious cracks in the IABA, hoiwever, and the latest move in the saga came in the form of a statement from the IABA's Board of Directors on Wednesday evening.

It insisted that, while they are in favour of adopting new measures outlined in the Rio Review, until a new Rule Book is formally approved by the governing body's Central Council, the council is within its rights to ignore the selection recommendations of the High Performance Director.

Sport Ireland CEO John Treacy had warned that the IABA’s funding is at risk over the fallout as he imposed a one-month deadline on them to make changes.

Treacy also claims that Dunne is being undermined by an element within the IABA.

But the IABA statement reads: "The Board of Directors of the Irish Athletic Boxing Association accept that selection of athletes for international competition should rest with the High Performance Management Team.

"However, the current Rule Book adopted in 2006, provides that it is the Central Council who currently have the authority either, to select or put in place alternative arrangements for selection."

The latest update on the IABA saga pic.twitter.com/nBpG7FFVQ7

On the issue of the acceptance of the Rio Review, they again appear to place the blame firmly at the feet of Central Council.

"The IABA can further confirm that a draft Rule Book which provides for all the Rio Review recommendations was prepared in March by independent consultant, Sarah O’Shea of SOS Sport Consult following consultation with both the Board and the the Central Council Rule Book Committee," the statement continues.

"The Board of Directors are committed to finalising consultation with the Rule Book Committee of the Central Council and the wider IABA membership as quickly as possible in respect of the draft before taking the legal steps required to effect the proposed changes."

A meeting between Treacy, the IABA President Pat Ryan and Minister of State for Sport Patrick O'Donovan was held this morning after Ryan had failed to turn up at a scheduled meeting yesterday.