Andy Lee will make his long-awaited return to the ring on the undercard of Gennady Golovkin’s world title defence against Daniel Jacobs in Madison Square Garden on 18 March.

The former middleweight world champion will face KeAndrae Leatherwood in an eight-round contest at the famous New York venue.

It will be the Limerick man’s first outing since December 2015 when he lost his WBO title to Billy Joe Saunders.

The card takes place the day after Michael Conlan’s professional debut in the same venue.

Leatherwood has a record of 19 wins, three defeats and a draw in his professional career.

And Lee believes that this fight will be as a step towards a potential fight against either of the card's main event Golovkin or Jacobs.

"I'm very pleased to be making my return on such a big event," said Lee, speaking to ESPN.

"Thank you to K2 Promotions, [promoters] Lou DiBella and Adam Booth for this opportunity. After taking a year out, I'm back. I feel refreshed and hungrier than ever.

"My goal is to eventually challenge the winner of GGG and Jacobs. 18 March will be the first step on that journey.

"I'm also very happy to be fighting in Madison Square Garden again, the scene of some of my greatest victories. I'm sure the Irish boxing fans will turn out and I look forward to putting on a world class performance." 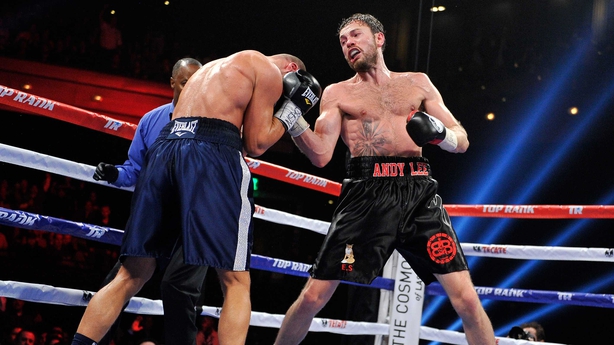 Promoter Tom Loeffler believes having Lee on the card is a logical choice – and one Irish fans will appreciate on St Patrick’s weekend.

"We have a lot of respect for Andy because he was one of the guys who agreed to fight Gennady but it didn't happen because Gennady's father passed away," Loeffler said.

"But we have a good relationship with Andy and I thought it made a lot of sense to have him on the card. A future fight between Gennady and Andy is always something to consider.

"Out of respect for Andy agreeing to fight Gennady back then, when nobody would fight him, it made sense to have him on the show, especially on St. Patrick's Day weekend.

"He's no stranger to the New York fans and the Irish fans. He's in a very competitive fight for his first fight back."