Billy Joe Saunders is eager to challenge middleweight supremo Gennady Golovkin once he shakes off the ring rust after nearly a year out of action.

WBO champion Saunders, who beat Limerick man Andy Lee last December to claim the only major world title at 160lbs not held by Golovkin, was immediately called out by the Kazakh following his brutal fifth-round stoppage of Kell Brook in London at the weekend.

The much-feared Golovkin, the WBC, WBA and IBF champion, wants to unify the division and Saunders is ready to offer him the opportunity in a bout that would feature two unbeaten fighters with a combined record of 59-0.

"He keeps banging on about wanting a chance at my belt, now I'll give him a chance if he wants it," English fighter Saunders said.

While Saunders respects Golovkin's standing in the sport, he believes he saw weaknesses in the 34-year-old's performance against Brook at the O2 Arena on Saturday. 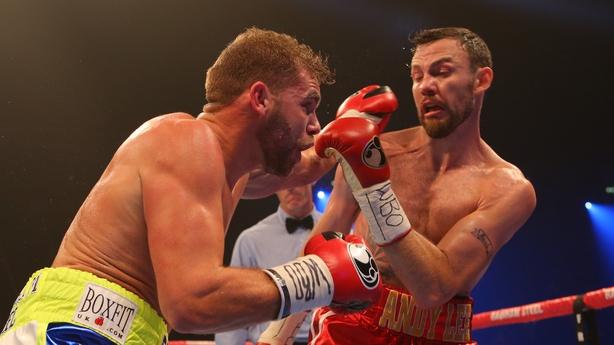 "Golovkin did what he should have done but I saw stuff at the weekend that I could certainly, certainly capitalise on," Saunders said.

"I know what I have to do and I know what it takes to beat someone like him. With me, it's a challenge and the bigger the challenge the more I perform.

"I really honestly don't believe that I've put on a big, big stand-out performance that I know I can.

"I don't need to say that because I've won all my fights but I know there's mountains more to come and fighting someone like Golovkin will well and truly bring it out.

"All he is is a man. People are beat before they get in the ring with him, people are like rabbits in headlights when they're looking at him, there is definitely not that on me."

Saunders must first come through the maiden defence of his world title on the undercard of the Tyson Fury-Wladimir Klitschko bout on October 29, with an opponent set to be named this week.

Saunders has endured a frustrating year since beating Lee to become champion nine months ago.

He was twice spurned by British rival Chris Eubank Jr for a rematch of their thrilling 2014 contest - which Saunders won by a razor-thin split decision - while a planned defence against Max Bursak in April was scuppered because of a hand injury to the 27-year-old.

"We wasted a lot of time on the Eubanks and then I got a fight for April and I picked up a hand injury," Saunders said.

"There's not a lot I could have done about that. Now I know I've got a date (and we'll) sort an opponent out this week.

"It's just something to get back in and shake some cobwebs off, they need shaking off and then see how I can put my goods to the test against Golovkin."