LeBron James scored 43 points to lead the Miami Heat past his former side the Cleveland Cavaliers 100-96 to keep up their pursuit of the Indiana Pacers in the NBA Eastern Conference.

James made all eight of his second-half free throws and also produced a stunning block to deny Spencer Hawes late on. Both Chris Bosh and Udonis Haslem then kept out Dion Waiters, which proved crucial as Cleveland were held at bay despite two three-pointers from Jarrett Jack.

James had failed to reach 25 points in his seven games since laying an incredible 61 on the Charlotte Bobcats and he told ESPN: "I've been out of rhythm. I just thought 'you can't make none if you don't shoot 'em", and I got it going."

Bosh had 21 points while Jack led the Cavs with 22.

The Toronto Raptors remain nine games behind the Heat in third place in the play-off standings after an overtime defeat to the Atlanta Hawks.

The Portland Trail Blazers survived an almighty scare to beat the Milwaukee Bucks.

When Damian Lillard's three-pointer put the Blazers 96-92 up with less than two minutes remaining, they looked comfortable - but a blistering Bucks comeback meant Lillard had to make a driving lay-up with five seconds left to take the game to overtime at 98-98.

A wild additional five minutes saw Portland eventually claim a 120-115 win, Lillard appropriately having the final say with two free throws to take his points total to 20 as Wesley Matthews led all scorers with 26.

The Golden State Warriors beat the Orlando Magic 103-89 and are just 1.5 games behind Portland in the sixth play-off spot in the West. Steph Curry scored 23 points and David Lee and Klay Thompson had 20 apiece, Lee adding 10 rebounds.

The Sacramento Kings won 117-111 against the Washington Wizards as Rudy Gay, Isaiah Thomas and DeMarcus Cousins scored 24 points each. 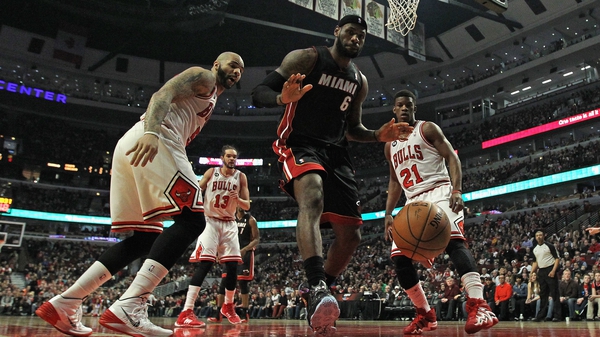