LeBron James suffered another night of struggles and the Miami Heat paid as they lost 95-88 to the Chicago Bulls in overtime.

James, who has looked off-colour since exploding for 61 points on Tuesday night, coughed up the ball at the end of regulation as the Bulls forced an extra period they dominated to condemn Miami to a third straight defeat - their worst run of the season.

Joakim Noah had 20 points and 12 rebounds while DJ Augustin scored 22.

Dwyane Wade scored 25 for the Heat, with James adding 17 on eight-of-23 shooting.

The Indiana Pacers are also on their worst run of the season, dropping a fourth straight game as they went down 105-94 to the Dallas Mavericks.

Monta Ellis and Devin Harris scored 20 each for Indiana.

James Harden poured in 41 points and Jeremy Lin added 26 as the Houston Rockets pulled out a fifth straight victory, beating the Portland Trail Blazers 118-113 in overtime.

The struggling Los Angeles Lakers found some relief in the form of Jodie Meeks who poured in 42 points to help them overcome Kevin Durant the Oklahoma City Thunder 114-110.

Durant amassed 27 points, 10 rebounds and 12 assists, but the Lakers squeezed out the win as Pau Gasol added 20 points and 11 rebounds.

Marcus Thornton scored 15 of his 27 points in the fourth quarter to lift the Brooklyn Nets to a 104-89 win over the Sacramento Kings.

Anthony Davis had 32 points – matching his career high – 17 rebounds and six blocks as the New Orleans Pelicans beat the Denver Nuggets 111-107 in overtime, while Kyle Lowry's haul of 20 points, 12 rebounds and 11 assists helped the Toronto Raptors beat the Minnesota Timberwolves 111-104.

Rajon Rondo dished out 18 assists while scoring 11, and Jeff Green poured in 27 to help the Boston Celtics beat the Detroit Pistons 118-111. 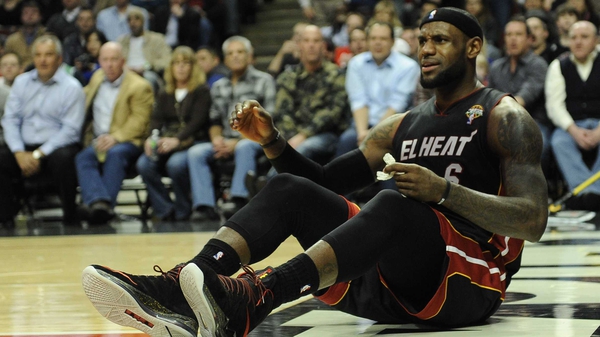