Ireland's Ciara Mageean has secured a silver medal in the 1500m final at the European Championships in Munich.

The Portaferry woman came into the final heavily tipped for a medal and she showed her intent from the very start as she burst to the front on the first lap.

Muir, who beat Mageean for the gold at the Commonwealth Games, ran a very similar race to that final, taking over the lead at the midway stage and pulling away but like that recent final in Birmingham, Mageean kept pace with her.

The Scot upped the pace on the final lap and looked as if she expected Mageean to drop off, but her rival would not be dropped and pushed the eventual winner all the way to the finish line.

Just before Mageean's medal race, Mark English secured his place in the final of the 800m.

The Letterkenny man put in a controlled displays of running to book his spot in the final as an automatic qualifier, finishing in third place in a time of 1:46.66.

English started strong and was among the early leaders in the opening stages before Spain's Mariano Garcia took charge and led them away.

English was fourth at the halfway stage with the tempo increasing, but it never troubled him and he sat on the shoulder of Garcia, maintaining his position and keeping pace.

The 29-year-old kept Garcia company in the final straight, before being pipped to third by Great Britain's Jake Wightman.

'He ran a cool race' - @MarkEnglish_ canters into the final at the 800m after a third place finish in his semi-final this evening #rtesport
📺 https://t.co/XnOP6grnB7 pic.twitter.com/xO95WRFK6Z

The Irish women's 4x400m team booked their place in Saturday's final by setting a national record of 3:26.06 seconds in finishing second in this morning’s semi-final.

With four of the six fastest Irish women in 400m in history in the line-up, expectations were high going into the event and Sophie Becker, Phil Healy, Rhasidat Adeleke and Sharlene Mawdsley didn’t disappoint, with Adeleke continuing her rich form with a blistering third leg to move Ireland from third place into the lead.

In a strong race that featured Germany, France, the Netherlands and Switzerland, it was Becker who took it out hard from lane two.

The Raheny Shamrock athlete set the pace (52.21) and after a clean handover to Healy, the Netherlands, through the formidable Lieke Klaver, eased into the lead.

Putting the disappointment in her early exit in the 400m aside, Healy (51.75) held firm down the stretch where Switzerland upped the pressure, with the Cork athlete handing the baton to Adeleke with Ireland in third.

The Tallaght AC star, fresh from setting a national record in her fifth-place finish in the 400m final, was in sensational form and ran the fastest leg of any athlete in 49.49, with Klaver the only other competitor to go sub-50.

The 19-year-old handed over to Mawdsley (52.58) with a significant advantage and while the European Championship debutant held firm over the first 250m, she tired significantly in the final 50m to allow the Netherlands squeeze home on the line, with Ireland securing an automatic place into the final and a national record.

The Irish 4x400m relay team react after qualifying for the European final and smashing the national record in the process - @sophiebecker_ @philhealy2 rhasidatadeleke and Sharlene Mawdsley #Munich2022 #rtesport pic.twitter.com/qZWSbdJLiU

"We knew we were capable of it. Obviously you have to come out and do it but the focus now is on the race tomorrow," Healy told RTÉ Sport.

"I'm thrilled to post that 51 seconds split, handed over to Rhasidat and she did an unbelievable job as did Sophie and Sharlene as well."

Also into a final is Louise Shanahan, who ran an outstanding race to seal automatic qualification for Saturday's 800m decider.

The Tokyo Olympian took her place in the opening semi-final after running 2:02.80 on Thursday and, in a stacked field, powered to the finish line with superb final 100m to cross the line in third in 2:01.15.

Shanahan, who is studying for a PhD in Quantum Physics at Cambridge University, ran an intelligent race from start to finish, tucking in on the curve behind the Pole Anna Wielgosz who had slowed the pace down on the opening lap.

As they took the bell, it didn’t take long for gold medal favourite Keely Hodgkinson to stamp her authority on the race, but Shanahan, who earlier this year became Ireland's fastest ever woman over 800m, held firm and found herself in fourth place coming into the final bend.

From there the Leevale athlete kicked on, holding her form and moving into third position to hold off the challenge of Olympic silver medalist Ekaterina Guliyev and Germany’s Majtie Kolberg to power to the line.

Hodgkinson was first across the line in 2:00.67, with Wieldosz second.

'A European finalist! We're delighted' - @LouiseShanahan reacts after qualifying for the final of the 800m at the European Championships following her superb semi-final run in Munich this morning #Munich2022 #rtesport pic.twitter.com/JrydpRY25K

Speaking after the race, Shanahan said: "I wasn't actually sure when I crossed the line where I finished so to see that big Q next to my name (and being) a European finalist, it's a dream come true. I can't believe it.

"Going into it, I ran the heats as if it was a final and I said the same thing for the semis. So I went out hard, I got a good position and I stayed close to the inside rail and then to get from 200 to 600 without any shoving or things like that.

"I knew I wasn't super fast going through the bell and I just thought they were going to be queuing up outside me so I was hoping the gap would open up and Keely was the one ahead of me and I knew she wasn't going to come back towards me. So I knew that gap would open eventually and to be honest, I couldn't believe when it did then and that there weren't more people flying down the outside."

There was huge disappointment for Ireland's men's 4x100m team in there heats, where a dropped baton on the second exchange resulted in the team failing to finish at European Athletics Championships in Munich.

Israel Olatunde, Mark Smyth, Colin Doyle and Joseph Ojewumi had aspirations of making the final either with a top-three finish in their heat, or as one of two fastest non-automatic qualifiers, with the national record of 39.23 also within their sights.

Starting in lane two, Olatunde, who ran a new national record to finish sixth in the first ever appearance by an Irishman in the 100m final at a European Athletics Championships on Tuesday, was on the opening leg and blasted out of the blocks.

It was a clean handover to Smyth and the Raheny Shamrock man ran a fine leg, but with Ireland well positioned in the top three, the baton was dropped in the handover to Leevale's Doyle.

'We're gutted to be honest' - The Irish 4x100m relay team disappointed but remain bullish about the future after a dropped baton in their heat #Munich2022 #rtesport pic.twitter.com/tqwBOcdMT3

That ended their interest in the race, with Tallaght AC's Ojewumi unable to bring it home.

Great Britain won the heat in a time of 38.41, with Netherlands second and Switzerland third. 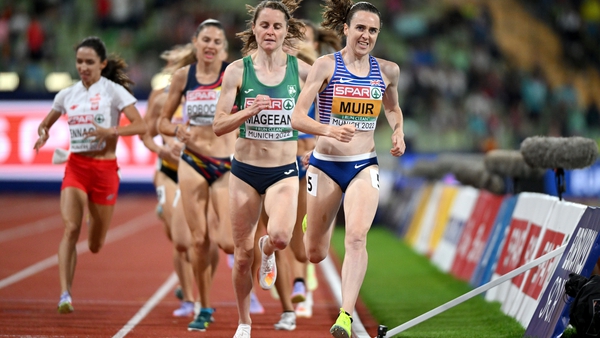 Ciara Mageean sets sights even higher after medalling in Munich