Ireland's Rhasidat Adeleke announced herself on the world stage with a blistering run in the final of the women's 400m at the European Championship in Munich, finishing fifth and setting a new Irish record.

Facing an unkind draw in lane one, the Tallaght woman started at a furious pace, overtaking her lane neighbour Cynthia Bolingo of Belgium.

By the half-way stage, Adeleke was up to fourth and looking to improve as she gave the race all she had but she faded slightly in the final 100 metres and was overtaken by Great Britain’s Victoria Ohuroguo.

Nevertheless, a fifth-placed finish in such a strong field represents a major step forward for the teenager, as does the new Irish record she set, as she finished in a time of 50.53.

The gold medal went to Dutch Olympic medalist Femke Bol, who clocked 49.44, while it was silver and bronze for Poland with Natalia Kaczmarek finishing second and Anna Kielbasinksa third.

This race was Adeleke's 49th in a grueling season split between international races and her collegiate duties at the University of Texas.

Adeleke confirmed to RTÉ Sport that she will also take part in the women's 4x400m relay later in the week.

'She left nothing on the track' - Rhasidat Adeleke runs a new Irish record in a brave fifth place finish in the final of the 400m, won by Femke Bol #Munich2022 #rtesport pic.twitter.com/j9F57xcRjq

The 19-year-old admitted to being slightly disappointed not to have won a medal in an event that she is still a recent convert to.

"I gave it all I had, it wasn't enough for a medal but I got a new national record so I'm happy," she said.

"It's my first year doing the 400m, hopefully I'm going to start training for it this fall and let's see what I can next year.

"I wish I just had more in my legs for the last 50m. I was looking at the screen and thought 'oh my god I'm in a medal position' and feel like I shouldn't have done that because it threw me off a bit.

"Honestly I was really hoping for a medal but I have to consider everything, this is like my 50th race of the season.

"To come here and break the national record… so many people support us in Ireland and I just want to give them something back. Thank you for supporting me and thank you for rooting for me." 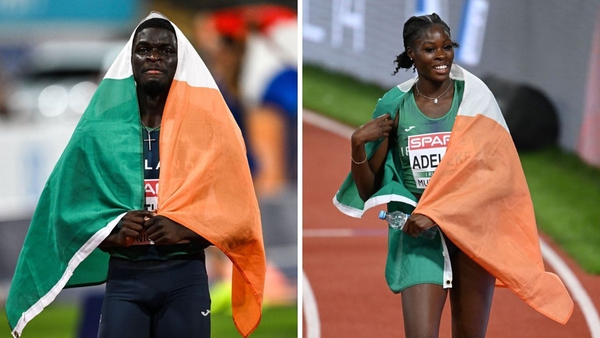