Israel Olatunde has his sights set on becoming the first Irish athlete to breach the sub-10 second barrier after establishing himself as the new national 100m record holder.

The Dundalk native made his breakthrough in Munich on Tuesday, making history by becoming the first Irish athlete to qualify for a 100m final at the European Athletics Championships before breaking Paul Hession's 15-year record in a time of 10.17 seconds.

On Wednesday morning, the 20-year-old told RTÉ's Today with Claire Byrne that his achievement was still sinking in.

But casting an eye towards the future, he said going under 10 seconds was what he will now be striving for.

"100%, it's been a dream of mine since I was a young kid so I definitely have my eyes on that for sure," Olatunde said.

"I'm going to keep working towards it with my coach and see where we can end up."

Along with his coaches, the UCD AC athlete credited both of his parents and his sister for helping him on the road to a national record and said his mother had been a sprinter herself in her schooldays.

"My dad claims I get my speed from him but I know I get it from my mum," he quipped.

"My parents especially but even my sister and my older brother Gabriel as well, they've sacrificed so much and supported me so much to chase my dreams and to pursue this.

"Their love and support means the world to me and I honestly wouldn't be here without all four of them for sure."

Olatunde added that he is about to start his final year in UCD where he is studying for a computer science degree and that the support from family, Sport Ireland and the university had helped him maintain the balance between sport and study more easily.

On the track though, he will return to action as part of the Irish team in the men's 4x100m relay later this week.

"I think it's so important for young kids to see Irish teams in the relays just to motivate and inspire the next generation that this is possible, we can get teams into these championships and we can perform well so the lads and I are really excited. We're going to be ready and we're going to take on Europe."

What an fantastic series of runs by @IsraelOlatunde5 at the Europeans. Congrats on the Irish record but more importantly on showing you can mix it with the best when it matters most!

Hession, whose national 100m record had stood for a decade-and-a-half, was quick to congratulate Olatunde on Tuesday night.

And speaking to RTÉ's News At One on Wednesday, he was glad to see the record broken on one of athletics' big stages.

"I was delighted for Israel. If I was to see my record go to anybody, I wanted it to go in a big race on a big day when it really, really mattered and to do it in a European final, it can't get much bigger than that," he said.

"So it's great to see and hopefully he can push on from here."

Hession was 24 when, in 2007, he broke the record previously held by held by Paul Brizzel and Gary Ryan and he feels time is very much on Olatunde's side in lowering the mark even further.

"The fact that he's only 20 is amazing really. I think back to when I was 20 and how much I still had to do and the world is his oyster," he said.

"He has a great chance now to not just make it at European level but to try and push on maybe do what I didn't do and make an Olympic final and push for even more.

Hession praised Olatunde's level of consistency and was impressed by how he dealt with the challenge of maintaining that attribute against elite competitors.

"It's good to see he definitely has that and he's obviously a big-time competitor, and the mental side in the 100 metres in particular, it's 90% in the head," he said.

"The training is one thing but on the day it's all about keeping your head and obviously he has that which is great to see."

'I was absolutely buzzing to see an Irishman in the final and breaking the Irish record in a European final' - Thomas Barr taking from inspiration from Israel Olatunde's performance in the 100m
Barr won his 400m hurdles heat this morning in a time of 49.49 pic.twitter.com/uKzJLvysZp

"It was bitter sweet, because I had to go to bed at half ten, and I was wired, absolutely buzzing to see an Irish vest, an Irish man in the final, and not only in the final but breaking the Irish record in the European Championships is absolutely unbelievable and something to be proud of," he said.

"I haven't met Israel since but I’m sure he is smiling ear to ear like he was on camera last night so I’m absolutely buzzing for him and it gave me such a lift coming into this today.

"It’s amazing to see that younger generation coming through and still I’m taking inspiration and excitement from watching what they are doing.

"I had goosebumps from watching the semi-final and going to bed as well so it’s really, really great to see." 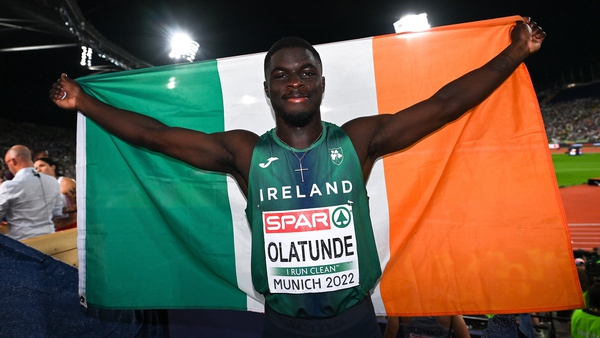 'Grateful' Israel Olatunde insists he can get even better