The Cork woman started strongly, challenging early pacesetter Amarachi Pipi of Great Britain before finishing in a time of 52.41 seconds as she edged out Romania's Andrea Miklos by just thousands of a second to win the evening race.

Her strong semi-final showing followed a commanding performance in this morning's heats which she had dominated in a time of 52.00, just .01 of a second outside her personal best, which made her the fastest qualifier for the semis.

Speaking to RTÉ Sport after reaching the final, Healy said: "I'm absolutely buzzing. I didn't make it to the bell first but coming down 300, I knew I could take [Pipi] and then coming round the bend I was like, 'I'm qualifying for this final, there's no other way about it.'"

On her prospects for Saturday's final, Healy added that she was going in without major pressure.

"So I'm going to go out there and give it my all and I'm just thrilled to be in the final. But it's not over yet just because I got into a final. I'll be going out there and giving everything that I have."

In the 800m, Nadia Power moved comfortably into the semi-finals of her event with a composed second-placed finish in her afternoon heat.

Power never looked in danger of missing out on a top three finish and ran a time of 2:03.16.

A comfortable second and place in tomorrow's 800m European indoor semi-finals for Nadia Power after running 2:03.16 in her heat #Torun2021 pic.twitter.com/srm02RZgtg

In the men's 800m, Mark English and Cian McPhillips advanced to the semi-finals.

Donegal native English survived a final-bend stumble in his heat to come home in third in a time of 1:49.79, finishing behind Patryk Dobek of Poland and France's Pierre-Ambroise Bosse.

Mark English survives a stumble to advances to the semi-finals of the 800m at the European Indoor Championships. #torun2021 pic.twitter.com/3Y4oVar3BV

Longford teenager McPhillips served notice of his talent in a composed performance as he finished second in his heat in a time of 1:49.98, being narrowly edged at the line by Spain's Mariano Garcia.

Cian McPhillips, at just 18, reaches the semi-finals of the 800m at the European Indoor Championship after a controlled run in the heats. #torun2021 pic.twitter.com/ShLpAudhzk

The 18-year-old told RTÉ Sport that he was "happy out" with how he ran.

"It didn't go as planned. I was hoping to be on the leader's shoulder and the start went out quicker than I anticipated but I'm happy to be able to get back," said McPhillips.

"I knew I had to make a move because I was falling behind and I knew the guys in front of me had good kicks. I needed to be up there and pushing onto them and luckily a gap opened up and I was able to move into it."

Cian McPhillips looks back on his big run in the 800m at the European Indoor Championships. #torun2021 pic.twitter.com/Cqwtm2wOWe

Kildare's John Fitzsimons missed out on the final after finishing fifth in a time of 1:51.00 in Heat 4, .03 of a second off the third place qualifying spot.

Andrew Coscoran and Paul Robinson were involved in the men's 1500m final in the last event of the night.

Norway's Jakob Ingebrigtsen, who crossed the finish line first, was initially disqualified after the race which meant Poland's Marcin Lewandowski was temporarily promoted to gold on home soil ahead of the Spanish duo Jesus Gomez and Ignacio Fontes, who took silver and bronze respectively.

However, Ingebrigtsen's win was later reinstated as gold medal winner with Lewandowski, Gomez and Fontes subsequently dropping a place.

Elsewhere, in the women's 400m, there was disappointment for Sophie Becker who failed to progress.

Ranked fifth out of the six athletes in her heat, Becker put in a fine showing to hold her pace and finish in third with a time of 53.31.

With only the top two from each heat automatically qualifying however, it wasn't fast enough to advance as one of the fastest losers.

Sharlene Mawdsley started strongly before finishing fifth in her heat in 53.68.

Cléirigh Buttner found herself in a strategic race, where the pace was quite slow for the opening 400 metres, and then she was badly positioned on the inside for the final lap and was unable to get past Spain's Daniela Garcia for that final spot.

Cléirigh Buttner ran 2:04.47, which is well outside her Irish indoor record.

Georgie Hartigan also finished fourth in her later heat and missed out on a place in the semi-finals as she ran 2:04.74 in Torun.

Another good showing from the Irish athlete, Hartigan led going into the latter stages before allowing eventual winner Christina Herring take control of the race and was unable to kick past Sara Kuivisto on the final straight for third.

Watch the European Indoor Championships, 4-7 March, on RTÉ Player and RTÉ2, with the morning sessions exclusively on Player. 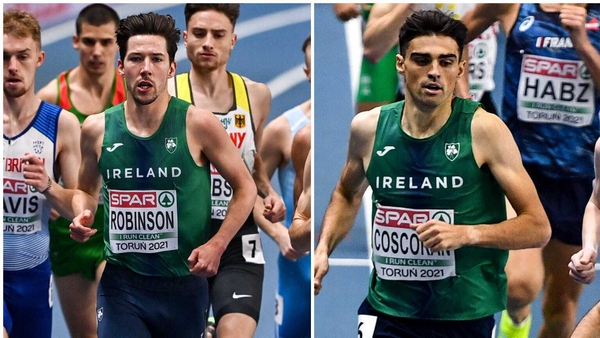