Ciara Mageean has become the first Irish woman to break the two-minute mark in the 800m metres after setting a new national record in Bern.

The Portaferry native, who finished 10th in last October's World Championships 1500m, clocked a sensational time of 1:59.69 to finish first in her final in Switzerland, crossing the line with more than a second to spare ahead of Norway's Hyenne Hedda.

The previous Irish record was held by Rose-Anne Galligan, who posted a time of 2:00.58 at the London Anniversary Games in 2013.

"I am absolutely delighted. With the disappointment of everything this year, Olympics postponed and lockdown for months, my coach, my team mates and I put our heads down and worked hard," she posted on her Twitter account.

"Devastated I won't run for Ireland this year but I'll continue to work and build on this for 2021 and beyond."

Irish Record and the first Irish woman ever to go under 2 minutes in the 800m.

I am absolutely delighted. With the disappointment of everything this year, Olympics postponed and lockdown for months, my coach, my team mates and I put our heads down and worked hard.

Last week Mageean told RTÉ Sport that while the Covid-19 had put her Olympic dreams on hold, she was in as good a shape as ever, and specifically targeted getting her name in the record books.

"I'm as fit as I’ve ever been. I’m so much fitter and stronger and in a really good mental place, so I’m very upset that I can’t get an Irish vest on and go out and race for Ireland.

"I've been eyeing up Irish records for a long time and getting closer and closer.

"It's definitely part of my dreams in my career to hopefully put myself on that list of Irish records and get one that stands for a while."

It marks a third national record for Mageean, adding to two previous indoor accolades. Last year she set a new mile record at the Indoor Grand Prix Boston, while in January, the 1500m indoor national record was shattered at the same event.

Olympic silver medalist Sonia O’Sullivan was among those to congratulate the 28-year-old on her achievement. 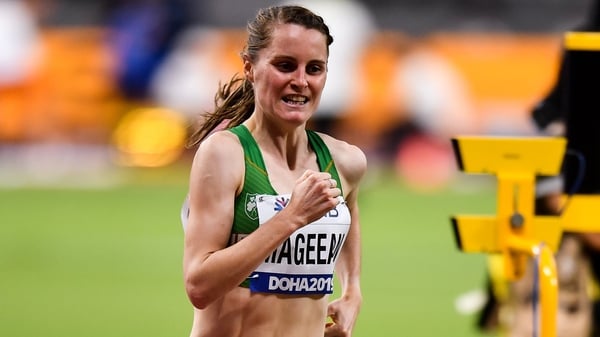 'If it was cancelled, I would be absolutely distraught' - Mageean has sights set on making final at Tokyo Olympics